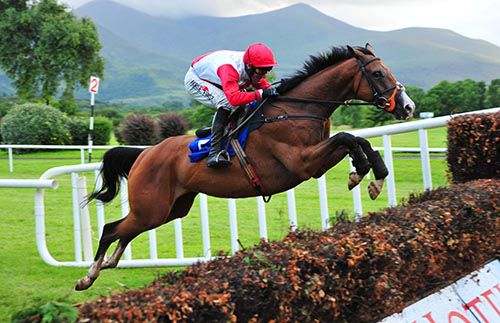 Rolling Stones guitarist Ronnie Wood could have a shot at winning the Randox Health Grand National in April after Sandymount Duke received an entry for the world’s most famous steeplechase.

Sandymount Duke has won 10 of 40 races in the red and white silks of 71-year-old Wood, who also bred the 10-year-old before putting him into training with Jessica Harrington.

He was last seen falling in the JNwine.com Champion Chase at Down Royal in early November.

As well as Sandymount Duke, Harrington has also entered high-class mare Magic Of Light — her first ever entries for the Aintree spectacular.

She said: “I’ve entered Sandymount Duke for Aintree, so we’ll see. He’s a summer horse really, so he would need good ground.

“He chipped a bone when he fell on his last run at Down Royal (in early November), so he’s had to have a bit of time off.

“It’s been a bit annoying actually because the way the weather has been he could have run all winter, no problem at all.”

Organisers of the £1million Grand National hope the the legendary musician might be in attendance on Merseyside should Sandymount Duke line up on April 6, with the Rolling Stones not beginning their tour of the United States until April 20.