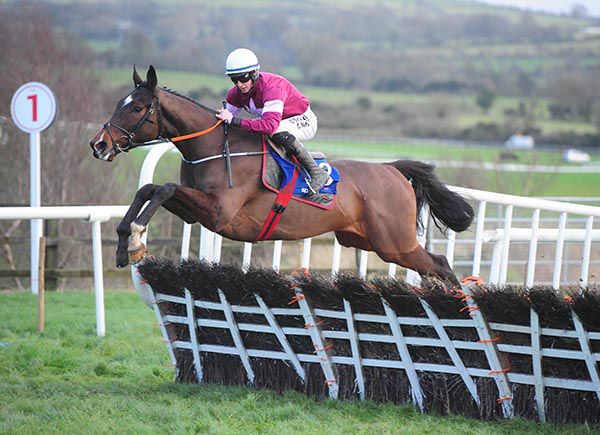 After winning the feature half an hour earlier, Gordon Elliott and Gigginstown House Stud quickly doubled-up with Vision D'honneur in the Sportinglife.com Maiden Hurdle.

Successful on his sole start in his native France, the son of Vision D'etat was subsequently sold for E350,000.

Well-fancied on his Irish debut at Leopardstown over Christmas, he could only manage fourth there, but was again strongly supported today, going off the 5/4 favourite.

Having raced mainly in third, he improved to lead after two out, and a quick jump at the last sealed the deal, as he powered clear to score by four and a half lengths.

Fellow French import Elixir D'ainay (2/1) finished second under Mark Walsh for Willie Mullins, while The Tartan Spartan (14/1) was another nine lengths back in third for David Mullins and Andrew Hughes.

"He's a nice horse. We think a lot of him, we think he's a very smart horse," said Elliott.

"In Leopardstown he didn't do anything wrong, only got beat. He was just green and jumped big. It might have been a blessing in disguise that he got beat that day.

"Jack came in and said he was still green today and said he's going to come on a lot from the run today.

"He's a horse that does everything very easy at home so he'll be okay hopefully.

"He'll probably go to Leopardstown now for something and he's a horse that could step out in trip as well, he's not just a two-miler, because he's so relaxed and has a great attitude."

Elliott was also successful with Ucello Conti and Kruzhlinin today, with both winning Open Lightweight races at Aghabullogue and Tinahely respectively.

Under the provisions of Rule 90, the Stewards allowed Robbies Magic trained by Ray Hackett, to run on receipt of the trainer's written assurance that the error identified in the certification of vaccinations would be corrected in accordance with Rule 91 within the timeframe specified.

S.W. Flanagan, rider of Active Force trained by Noel Meade, reported to the Clerk of Scales that his mount was pulled up with a circuit to run having gone lame.

C.D. Maxwell, rider of No Way Jack trained by Patrick Martin, reported to the Clerk of Scales that his mount hung right from before the third last hurdle.

C.A. Landers, rider of Poseidon trained by C.Byrnes, reported to the Clerk of Scales that his mount ran short of room turning into the straight and had nowhere to go.

At the request of the Stewards, M.F. Mooney, rider of Upgraded trained by A.J.Martin, reported to the Stewards' Secretaries that his mount stepped at a number of hurdles.