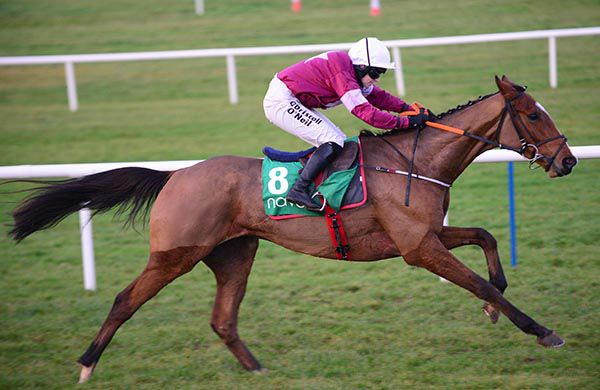 Gordon Elliott topped and tailed the card with a short-priced double as Wide Receiver made a bright start under rules by landing the Club Active Gym Flat Race at Navan.

The Sholokhov gelding has big expectations to fulfill as he was purchased by Gigginstown for 410,000 at Cheltenham in February soon after winning impressively in a Cragmore point-to-point.

He went some way towards justifying that lofty price tag by travelling strongly to lead early in the straight and quickened clear from over a furlong out.

The 5/4 favourite kept on well under Lisa O’Neill to score by two and three quarter lengths.

Julies Stowaway stayed on nicely to take the runner-up spot with The Priests Leap who briefly looked a threat two furlongs out, the same distance further away in third.

Elliott said, “He was bought to be a good horse. He's raw and he doesn't do much at home.

“He's a horse for next year, he won't do much more this year, and he's a horse we'll mind to go jumping next year. He's a big raw horse.

“He got light on us and we had to back off him. He's a horse for the future.”

The master of Cullentra House was also on the mark in the opening maiden hurdle with another 5/4 favourite Festival D’ex.