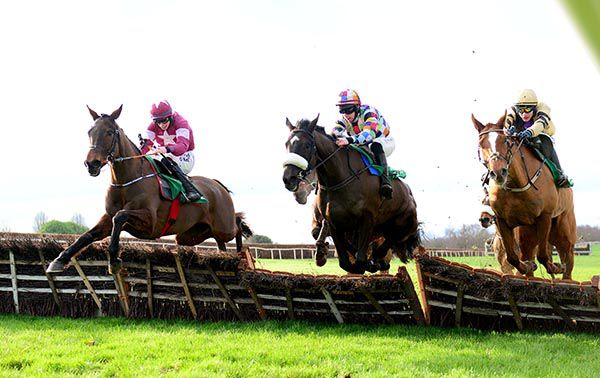 A 1-2 in the opener was followed by further success for Gordon Elliott in race two at Navan as his Gigginstown House Stud owned 14/1 shot Moratorium landed the www.navanracecourse.ie Maiden Hurdle under Jack Kennedy.

Davy Russell partnered the opening Cullentra House Stables victor, Galvin but this time in a huge field two and a half miler Kennedy kept Moratorium up to his work to hold fellow Gigginstown hope, Diol Ker (a 7/2 shot for Noel Meade and Sean Flanagan) by three parts of a length.

Meade also had the fourth home, Where Eagles Dare whilst well-backed odds-on favourite Face The Facts (4/6) had every chance before eventually filling the fifth position.

“He was running around smaller tracks and getting beaten and the big galloping track suited him. Jack said he idled a bit when he got there," revealed Elliott.

“He’s a big chaser for next year.”

B. Hayes, rider of Sophie's Best trained by P.Meany, reported to the Clerk of Scales that his mount ran very green.

A. Ring, rider of Manomine (GB) trained by R. K. Watson, reported to the Clerk of Scales that his mount made mistakes jumping.

The Stewards informed S.J.Mahon, trainer of Larry Tully that his charge could be liable for suspension if it should repeat any unruly behaviour when attempting to start in future races

P.E. Corbett, rider of Scaramucci trained by Philip Fenton, reported to the Stewards' Secretaries that his mount ran one paced and failed to quicken.