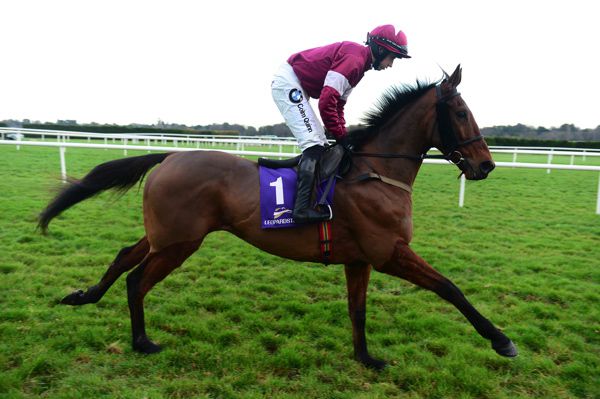 Alpha Des Obeaux heads the weights and a strong Gordon Elliott team for the Leinster National at Naas on March 10th.

The Thyestes Chase runner-up is one of 14 entries for Elliott as the trainer looks to win the race for a first time. Grade 1 winner Don Poli and Irish Grand National winner General Principle are also among Elliott’s powerful squad for the €100,000 Grade A handicap.

Ms Parfois will bid to become the first British-trained winner as Anthony Honeyball’s dual Listed race winner featured on a list of 48 early entries for the race.

There could be a strong local angle to this year’s renewal with Ted Walsh entering the JP McManus-owned Any Second Now while his son-in-law Ross O’Sullivan has entered his stable star Baie Des Iles.

Trainer Brian McMahon trains just a small string of horses in Co Clare but his flag-bearer Se Mo Laoch is a rapidly improving eight-year-old who could well give McMahon the biggest success of his training career.

McMahon enjoyed notable success with Se Mo Loach last month when winning the Punchestown National for Qualified Riders and has been pleased with the incredibly consistent performer since then.

“Se Mo Loach has bounced out of Punchestown in great form and I couldn’t be happier with him,” reported McMahon.

“The form of that Punchestown race has worked out well. Whisperinthebreeze has dotted up at the Dublin Racing Festival, Snugsborough Hall and Double Portrait were third and fifth and they’ve won as well so it’s always good to see that.

“We’ve put Se Mo Laoch in the Kim Muir at Cheltenham but I would think that Naas is probably more likely. It is always a good way to go racing when you are fairly confident that he is going to run his race. I think he’d handle a cut in the ground and might even be better with a slight ease in it but the trip, the ground and the tough galloping track at Naas with a stiff finish should suit him nicely.”

“The Leinster National is a nice target to have but it would be nicer to win it!” said McMahon.