Fan makes it 3 for Mullins at Thurles 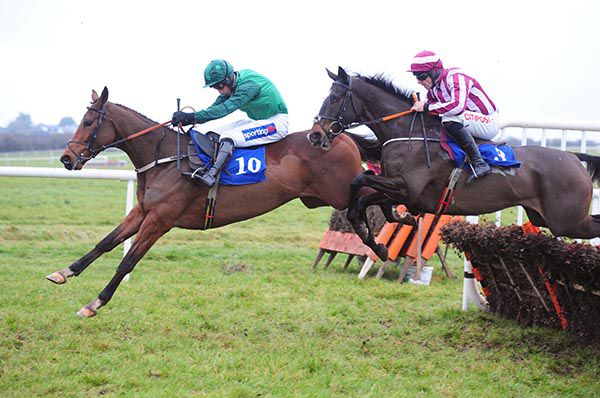 Backed from 9/10 into 8/13 on track Fan De Blues won on debut for the Willie Mullins yard to bring up a Thurles treble for Closutton in the Holycross Maiden Hurdle.

Daryl Jacob was over to ride for his employers, Simon Munir and Isaac Souede, but despite the market confidence the Poliglote gelding only got there in the closing stages to win by a length and a quarter from Exceeded Brief

A win is a win as the saying goes, though backers of Fan De Blues were certainly made sweat.

He led, before being joined before three out and headed approaching the straight.

Not fluent two out Fan De Blues wasn’t making any impression between the final two flights. However he kept on well on the run-in to score from the Henry de Bromhead pair, Exceeded Brief and Mud Runner

The earlier Mullins winners were Royal Rendezvous and Elfile both ridden by Paul Townend.

"He looked as big as a bull to me when I saw him with his number-cloth on and he did well to do what he did today over a short trip," said Mullins.

"I had asked Daryl to be positive on him from the start and thought he was too positive but when he got his second wind half way down the straight he quickened nicely and passed the other one.

"He is a real chaser but is only four and I'll keep him as a novice hurdler and we will probably go up in trip with him as well."

At the request of the Stewards, T.N. Brett, rider of Stadius trained by S.M.Duffy, reported to the Stewards' Secretaries that his mount jumped poorly and stayed on past tired horses.

P.J. Cawley, rider of Four Courts trained by Brian Francis Cawley, reported to the Clerk of the Scales that his mount made a slight respiratory noise.

T. Ryan, rider of Red Lemonade trained by W.J.Austin, reported to the Clerk of the Scales that his mount jumped slightly left.