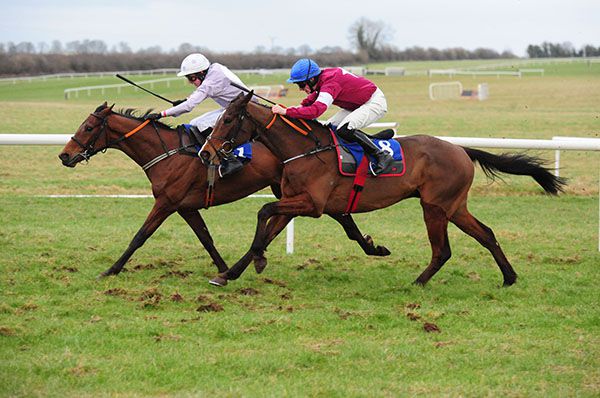 The son of Saddler Maker had shown promise both in point-to-points and in two previous bumper starts and, having drifted out to a generous 6/1, was sent off a 9/2 chance at the off.

Run For Oscar got a nice run up the inner to strike the front about half a mile from home and looked set to score over a furlong out.

However, Favori De Champdou really got motoring for Vaughan from that point and Gordon Elliott’s charge led inside the final 100 yards to score by three quarters of a length.

Ajero made a promising debut a further five lengths back in third.

Vaughan rode 20 winners on the Flat when based in the north of England and has turned amateur since joining Elliott having won over hurdles on Count Simon at Down Royal last May.

Elliott said, "He is a grand honest horse and probably liked that bit of alright ground as well and we'll have a bit of fun with him now. He'll go jumping next season."