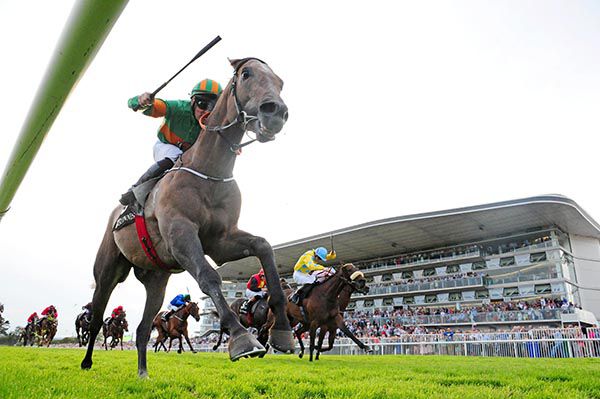 After close second placings the last twice Imposing Supreme (8s into 6s) delivered in the Arthur Guinness Handicap at Galway.

The latter drifted left and there was a steward’s enquiry but there was no alteration to the judge’s placings.

After gaining a three parts of a length and half length verdict, Gibney said of the Gary Carroll-ridden victor: "I'm delighted for the horse as he deserved that.

"He has only run nine times and has finished second four times so I was hoping he would get his head in front and I'm delighted for Leonard (Kinsella) and Kevin (Haigney) who are my biggest supporters.

"We had no intention of coming to Galway until Gary (Carroll) got off him at Killarney and said Galway would suit him, so that was it.

"He is improving, is solid as a rock and has a fantastic temperament. He is big, is all there, and it is easy to train horses like him and I wish I had a stable full of horses like him.

"That's my first Galway festival winner as a trainer but I won the GPT as a jockey on Saving Bond for Noel Meade (in 1997)."

The Stewards enquired into possible interference in the final furlong involving Njord ridden by R.C. Colgan, placed 4th, Royal Canford, ridden by W.J. Lee, placed 2nd and Starlite Dancer ridden by C.D. Hayes, placed 3rd. Evidence was heard from the riders concerned. Having viewed the recording of the race and considered the evidence, the Stewards made no alteration to the Judge's placings and took no further action.