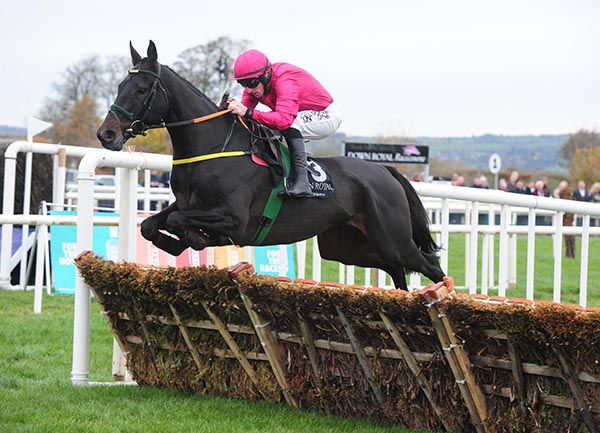 First Approach has his sights lowered in the BetVictor W.T. O’Grady Memorial Irish EBF Novice Hurdle at Thurles this afternoon.

The Noel Meade-trained six-year-old was seriously impressive on his hurdling debut at Down Royal in November and performed with credit when fourth in the ‘Monksfield’ Novice Hurdle at Navan on his next start.

He never threatened to land a telling blow when sixth of seven finishers in the Grade One Lawlor’s of Naas Novice Hurdle on his latest outing, but has far less on his plate in this conditions event and looks the one to beat.

Despite being the highest-rated horse in the field, First Approach receives 5lb from Gordon Elliott’s Monbeg Worldwide who is also dropping in class after consecutive outings at Grade Two level.

The winning point-to-pointer showed useful form in bumpers without managing to get his head in front, most notably chasing home Blackbow at Leopardstown on St Stephen’s Day 2017.

His hurdling career has been a little underwhelming thus far, but this looks a very winnable race and he will do well to find a better opportunity to finally open his account.

Henry de Bromhead’s King Of Brega bids to make it three from three at the track in the Matty Ryan Memorial Handicap Hurdle.

The 12-year-old shows the fire still burns bright when scoring over the course and distance last month and with 7lb claimer Daniel Holden in the plate, the veteran looks sure to go well again.

Elliott’s Roaring Bull should claim a second win over fences in the Watch RacingTV With Free Trial Now Handicap Chase, with the application of blinkers likely to bring about improvement.

Gearoid O’Loughlin is double-handed in the concluding hunter chase, with recent Clonmel winner Sidetracked joined by the long-absent Home Farm.

The latter was rated in the 150s at the peak of his chasing career and ran in the 2015 Cheltenham Gold Cup behind Coneygree.

It will be interesting to see how much ability he still possesses on his first outing since running in a point-to-point in May 2017.