Fitzpatrick gets the Gold in Dundalk finale 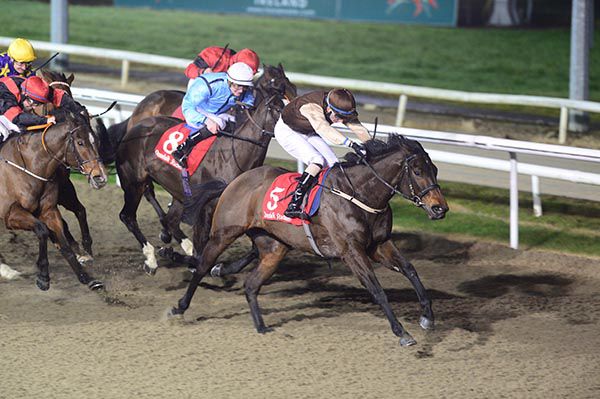 Rathangan County Kildare handler Billy Fitzpatrick has his horses in good order and he sent out the George Halford owned and bred Dandys Gold to triumph in the concluding Fast Shipping Handicap at Dundalk. Crossingoz went close when backed from fancy prices into 10/1 before finishing third for Fitzpatrick in the second split of the 45 to 65 handicap at 7 o'clock.

Dandys Gold wasn't without her supporters either, and after being clipped from 12/1 into 9/1, she defeated View The Bay (11/2 favourite) by a length and a quarter, despite veering left in the final hundred yards.

David Simmonson did the steering on the successful daughter of Dandy Man.

“She had been running well recently and was placed a few times,” said Fitzpatrick.

“It's great to get the win tonight. We brought her back to six furlongs, normally she runs over seven, but she won over six in Cork last year. We're very happy.

“I was intending to give her a break but we might just give her another run now.”

T.P. Madden, rider of Hee Haw trained by Adrian McGuinness, reported to the Clerk of Scales that his mount was slowly away.