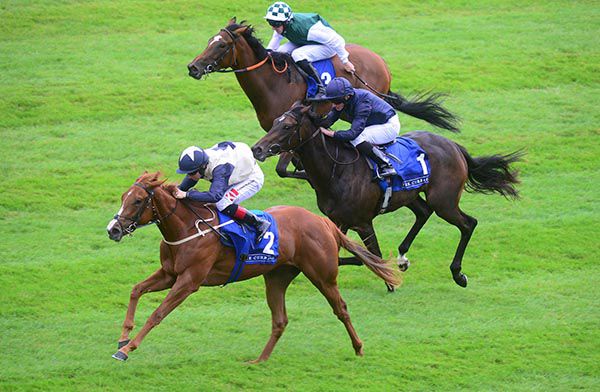 Six horses were making their debuts in this eight-runner field and plenty of Group-race entries were held in what could be an informative race.

The 33/1 outsider Getawiggleon (from 66/1) took the field along under Conor Maxwell with Blissful tracking in second and French Rain a handy third.

French Rain was asked for her effort by Colin Keane racing past the two pole and she hit the front inside the final furlong.

From there, the 3/1 favourite really came home well to put a length and three parts on Blissful (10/3). Getawiggleon ran a stormer in third, a further three quarters of a length away.

Assistant trainer Shane Lyons said: “She was very professional and did it well.

“We liked her at home. She'll improved plenty for the run, as ours do normally. We've a good bunch of fillies and she's up there.

“She holds all the early closing entries for the good races, mainly because we have to do it early.

“She'll improve for a step up in trip as well.

“There were a lot of talking horses there and we knew we'd be a bit green so we're delighted with what she's after do and she was professional with it.”