From Eden battles home under Russell 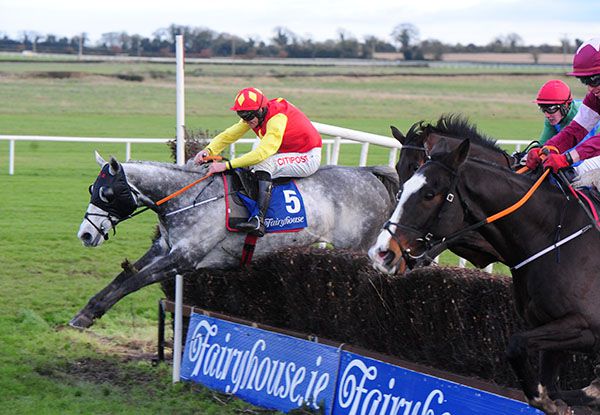 From Eden, far side, is pressed over the last
© Photo Healy Racing

From Eden (6/1) was a game winner of the concluding beginners' chase on Fairyhouse's card and led home a one-three for Gordon Elliott.

It became a real battle in the closing stages of this two mile five race and The White Volcano stayed on strongly for second, beaten half a length by From Eden and Davy Russell. The White Volcano had been backed from a morning price of 33/1 down to 8/1 on the off.

Diamond Turf was the same distance back in third and was also popular with punters at 9/2.

Gordon Elliott said: “He deserved to win a race. He ran a great race in Galway and has been a consistent horse.

“He's owned by my head man Simon McGonagle and a bunch of our friends. It's great that he's won.

“He's a plucky old horse. He's won a couple and we'll have a bit of fun with him.”