Frosty comes from last to first under Slattery 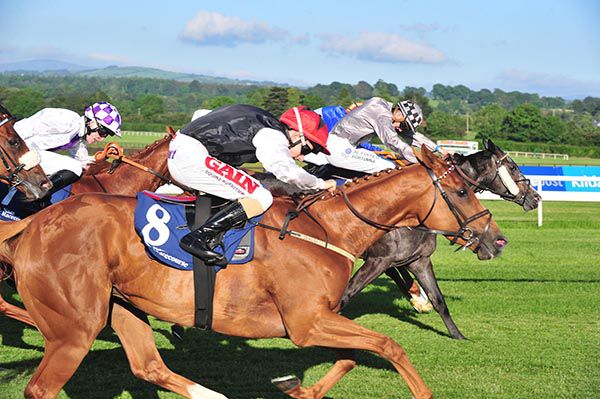 The Dermot Weld trained chestnut put in some good efforts in defeat as a juvenile, but disappointed on her return to action at Sligo last month, before again failing to make an impact on her latest outing at Listowel.

Sent off at 14/1 this evening, the daughter of Footstepsinthesand was slightly slow into stride and raced in rear in the colours of Moyglare Stud Farm.

She still had plenty to do from the two furlong pole, but really powered home down the outer inside the final furlong, getting up in the final strides to prevail by a head. Angels (11/2) was the one just denied under Ben Coen for Johnny Murtagh, while Laethanta Saoire (9/1) was another half a length back in third. Star Quality was the 7/2 favourite and she faded in the closing stages, eventually finishing a disappointing eighth.

Weld said afterwards: "That was the plan. He rode her in Listowel and she just ran a bit keen with him. We agreed this time that he would take his time, get her switched off, get her to relax and ride her to come home.

"He's getting lots of practice winning these races and he's a very good young rider. His strike rate for me is pretty high."