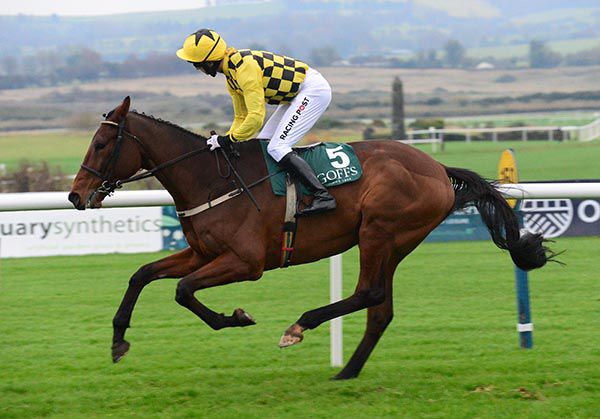 Willie Mullins made it four on card at Punchestown this afternoon when The Big Getaway ran out an effortless winner of the bumper on the card.

The 2/9 shot settled second early on in the two-mile contest before Patrick Mullins let him stride on into the lead shortly after passing the five furlong pole.

The winner, a former point-to-point scorer, had been runner-up in two bumpers last season, including when second to Sixshooter at the festival meeting here.

Mullins, “He’s a chaser in the making. I’d imagine we’ll go hurdling with him now and probably chasing next year.

“Patrick thought an extra half mile would be no problem and softer ground no problem. He looks a really nice type.

“He’s probably as big as Douvan, maybe even bigger. We’re going to remeasure him on Monday to find out and he’s certainly one of the biggest horses I’ve had anything to do with.

Patrick Mullins later confirmed it was his 600th career winner saying, "Just another 400 to go! I'm level with Ted Walsh on eleven amateur titles so it would be nice to add to that.