Glory for Fruits as he ends long losing streak 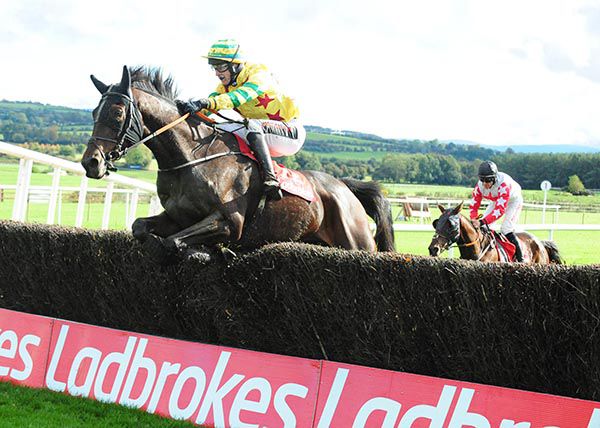 Fruits Of Glory recorded just his second career success and his first since February of 2015, as he claimed the Ladbrokes Home Of The Odds Boost Handicap Chase.

Owned and trained by Eddie Cawley, the ten-year-old had been on a long losing streak since winning a maiden hurdle at Clonmel, but he was placed four times from his last seven starts and finished an eye-catching second at Sligo on his most recent outing.

Upped in trip today, the son of Fruits Of Love was available at 16/1 in early shows, but eventually went off at just 7s under JJ Slevin.

Settled in rear, he made a mistake at the fourth and again four out, improving to take closer order after the next.

In front between the final two obstacles, he was pushed out on the run-in, going on to score comfortably by five lengths. Little Haarth (25/1) ran on nicely to snatch second under Ryan Treacy for Des McDonogh, while Graineyhill (8/1) and Hash Brown (16/1) were third and fourth respectively.

The Martin Brassil trained Artic Pearl was sent off the 10/3 favourite (from 9/2). He travelled into the race nicely but made a bad mistake three out and unseated Mark Walsh at the next after another jumping error.

"We're delighted with that. We've waited a long time for him to put his nose in front," said Cawley who was also on the mark with Select Opportunity at Fairyhouse on Saturday.

"He had run 40 times up to today and only put his nose in front once before. He was one of those horses that was on a yellow card a few times!

"He ran very well in Sligo and was unlucky. I stepped him up two furlongs today and I was concerned about it because I've never run him over this trip before but he handled it very well.

"I'm more than surprised because normally you are disappointed when you step them up. He did it well, he made a few blunders on the way but survived them and that's half the battle.

"That gives us a few options and there might be another one in him somewhere along the line. I wouldn't even mind stepping him up another bit (in trip).

"I've a few nice horses and they all seem in good form so roll on the winter."