Golden Spread rounds off a memorable day for Mullins 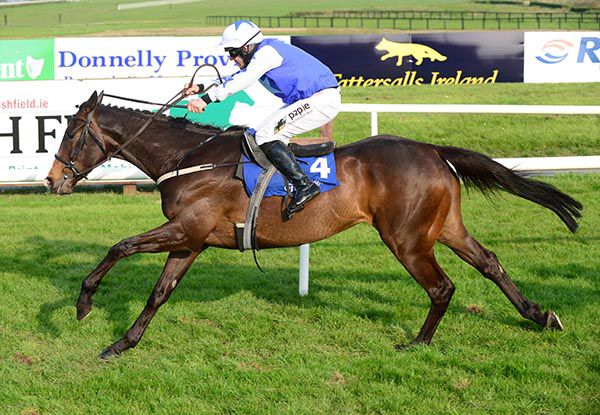 Golden Spread rounded off an afternoon to remember for Willie Mullins, as he completed a treble for the master of Closutton in the Cawley Furniture (Pro/Am) Flat Race.

Earlier successful with French Made in the Grade 2 Juvenile Hurdle, and Burrows Saint in the Irish Grand National, Mullins saddled two in this concluding two mile contest. Mt Leinster (3/1) was the better fancied of the duo, but he had to settle for the runner-up berth, with Golden Spread (5/1) making all under Barry O'Neill in the colours of the Supreme Horse Racing Club.

The front two went five and a half lengths clear of Sizing Pottsie in third, with this one returned at 5/1 (from 13/2) under Finian Maguire.

"He's a lovely staying horse and he just gallops all day,” said Mullins.

"Barry was wondering if he was going fast enough in front but every time something came behind him it just pushed him along. He just galloped to the line.

"He's one to look forward to as a staying jumper. I think I'll keep him going. We'll have a look at Punchestown, I don't know if it'll come too soon, but he could go back on the Flat as well.

"We'll get over Punchestown and have a think about what we are going to do.

"The runner-up was very keen. He's had a break and there might be a bit of improvement in him. He'll definitely go to Punchestown."

The Irish Horseracing Regulatory Board Veterinary Officer examined The Very Man trained by Gordon Elliott, at the request of the Stewards and reported the animal to clinically abnormal post race.