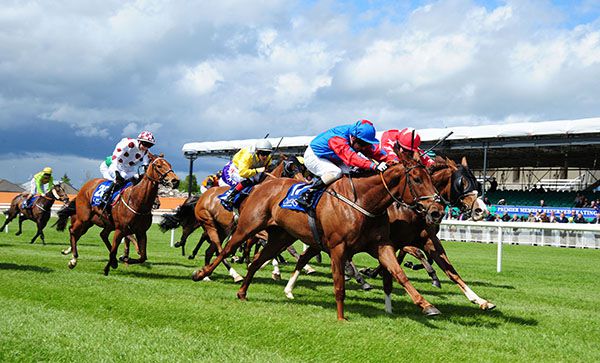 After going down narrowly at the Curragh on Saturday, Gopsies Daughter is turned out again quickly to contest the Ballykisteen Handicap at Tipperary today.

The Denis Hogan-trained seven-year-old was beaten by a head in a 28-runner contest at the Curragh, and she’ll attempt to go one place better just two days later, with Wayne Lordan again the saddle.

Champion jockey Colin Keane takes the ride on Military Hill and he will be aboard recent Fairyhouse winner Misty Millie in Follow @TipperaryRaces On Twitter Handicap.

This daughter of Dylan Thomas was successful over hurdles at the Co Meath venue last month and switches back to the level off a mark of 60.

Clonmel winner King Christoph and top-weight Song Of The Sky are sure to prove popular with punters, while Mastermind is another interesting contender with Declan McDonogh aboard.

McDonogh looks to have strong claims aboard Days Without End in the BBQ Evening May 24th Maiden.

Second on his last two starts, the five-year-old gelding has the beating of Roseriver Has and Great Trango and it will be disappointing if he is unable to make it third time lucky.

The Michael Grassick-trained Eadbhard has also been placed on his last two starts, and he can be expected to go close in the five-furlong www.tipperaryraces.ie Handicap. Early Call went down narrowly at Dundalk recently, and he looks the one to side with in the opening Buy Tickets Online @TipperaryRaces.ie Maiden. Beckwith Place and newcomer Mayaadeen appear the two to focus on in the Fundraising Events At Tipperary Races Maiden, while recent winners Footstepsintime and Queen Rabab are the standout names in Racing Again @TipperaryRaces May 24th Handicap.

Twelve have been declared for www.tipperaryraces.ie Handicap over nine furlongs, and three-times winner Avalanche should give a good account of himself here.

Heffernan grabs the headlines with 674/1 treble

Seamie Heffernan stole the limelight at Dundalk this evening with a 674/1 treble rounded off by a major gamble on Sand Castle in the concluding DundalkStadium.com Handicap.

Inishmot Prince makes it five wins this year at Dundalk

Inishmot Prince has proved a real star for Tom McCourt and young claimer James Ryan at Dundalk this year and recorded his fifth win since February in the William Hill Bet Boost Handicap.

Ampeson recorded his fifth win in just over 12 months when justifying good support in the featured William Hill Pick Your Places Handicap at Dundalk.

Leclerc continues to prosper on the sand

Leclerc recorded his second win in the space of nine days when justifying 7/4 favouritism in division two of the William Hill Racing Radio Apprentice Handicap at Dundalk.