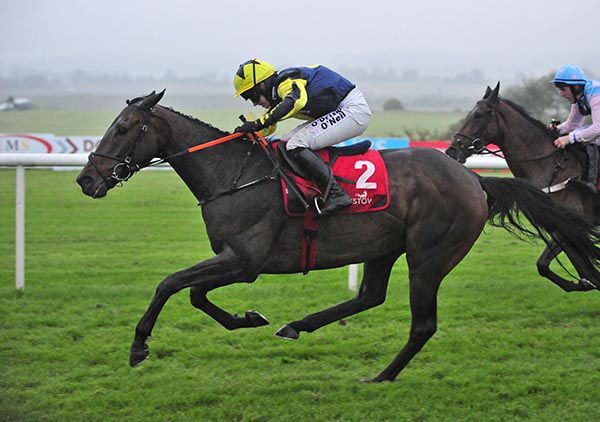 Gordon Elliott sealed a Punchestown double as Gun Merchant finished well in the final furlong of the bumper to come in by two and a half lengths.

He was ridden by Lisa O'Neill to come with his challenge over a furlong out. The 11/4 joint favourite soon headed Getaway Some Day but it was only in the closing stages that the latter gave best on what was a promising debut at 50/1 for John Neilan.

McQuinn stayed on for third at 100/1 for trainer Suzy Barclay. He was beaten six and three quarter lengths by the victor.

Gordon Elliott said: “He’s a nice, big, galloping horse. We’ll leave him now for his summer holidays and he’ll be a grand horse to come back in and go hurdling.

“My father (Pat) and a heap of his friends own him so it’s grand. I actually trained my first Irish winner for them (Barstool Prophets Syndicate) with a horse called Toran Road (at Kilbeggan in May, 2007).”

The Stewards received a report from Mr. P.L. Malone , Irish Horseracing Regulatory Board Clerk of the Scales, regarding the fact that Mr A.J. Fox , rider of Mcquinn , weighed in at 2 lbs overweight. Evidence was heard from the rider concerned. Having considered the evidence, the Stewards were satisfied that Mr. A.J. Fox was in breach of Rule 231 and they therefore suspended him for one race day.

The Stewards interviewed Mr A.J. Fox, rider of Mcquinn, concerning his use of the whip in the closing stages of this race. Evidence was heard from the rider concerned. Having viewed a recording of the race and considered the evidence the Stewards were of the opinion that Mr. A.J. Fox was in breach of Regulation 10.3 (g) in that he used his whip with excessive frequency. Having considered his record in this regard, the Stewards suspended Mr. A.J. Fox for one race day.