Hamariyna gets it right on second start 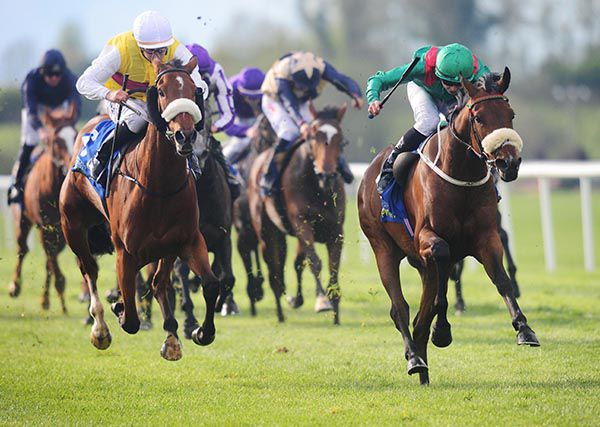 After an eye-catching debut effort seven furlongs at Leopardstown earlier this month, Hamariyna made the breakthrough on her second start in the Tipperary Races Fillies Maiden.

The Mick Halford trained daughter of Sea The Moon kept on strongly to take third behind Titanium Sky at the Foxrock venue, and she was sent off the 11/10 favourite stepping up in trip to a mile and one this evening.

Settled in fourth by Ronan Whelan, the Aga Khan owned bay took closer order and was pushed along from early in the straight.

She moved into second at the furlong pole, and was soon ridden to tackle Fancy Feat getting to the front inside the final 150 yards, before going on to score by a length.

Fancy Feat (5/1) had to settle for second under Shane Foley for Jessica Harrington, while Simply Beautiful (4/1) was a further four and a half lengths back in third.

The winner is a half-sister to Hunaina who won three times for Halford before being sold to France for a massive 725,000 pounds.

She has since won another three, and landed a Group 3 contest at Chantilly last summer.

Halford said afterwards: "She had a lovely first run in Leopardstown and we liked her a lot at home. It's nice to get a bracket for her early in the year and she likes an ease in the ground. She has a lovely temperament.

"The race worked out lovely and she did everything right. You'd be hoping there would be more to come with her through the year and her half-sister (Hunaina) kept improving and got better with age.

"She doesn't lack pace but might even get further in time and she loves an ease. She could be a nice filly with a future."