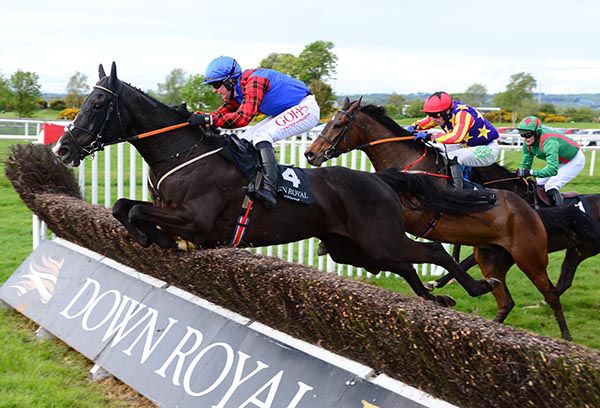 Shark Hanlon's Rewritetherules is one of 16 contenders for thetote.com Connacht National Handicap Chase at Roscommon today.

The five-year-old son of Jeremy has been a revelation of late, having failed to make an impact in any of his five point-to-points or a bumper before going on to win two hunter chases — at Down Royal and Tipperary.

Rewritetherules was particularly impressive at Tipperary and it will be intriguing to see how he fares off an initial mark of 116 for his first start in handicap company.

Henry de Bromhead is triple-handed in the feature race on the evening card with Riviera Sun Full Cry and Ellie Mac — and Paul Townend is an interesting jockey booking on the latter. Tesseract was sixth in this contest 12 months ago, and should give a good account of himself again — while other leading hopes are Beyond The Law Mac N Cheese and Hugo ‘N Taz.

The 2018 Triumph Hurdle winner has been revitalised since switching to fences and should prove hard to beat in this two-mile contest. Take A Turn and Hammerstein are the Elliott contenders in the Dermot Hughes Car Sales Rated Novice Hurdle and both appear to have solid claims.

The former has won his last two over flights, while Hammerstein was successful on his previous outing at Killarney.

None of the seven runners can be safely ruled out in a competitive affair, with Galilean (first-time blinkers) and Cosmo’s Moon the others likely to feature prominently in the betting.

Sean Flanagan takes the ride on Cosmo’s Moon, and he will also be aboard Razoul in the opening www.roscommonracecourse.ie Maiden Hur.dle.

Trained by Ray Cody, seeking his first success, the son of Mastercraftsman went down narrowly at Tramore recently — and will be well-fancied to go one place better.

Flanagan will partner another Tramore runner-up in the shape of Nancy D’alton in the Ladies Day At Roscommon Racecourse On Monday 8th July Handicap Hurdle.

The four-year-old bay is one of 18 set to take part in another wide-open heat, with Down Royal winner Glendaars Warrior and the Denis Hogan-trained Barna Venture others for the short-list.

Punchestown victor Hero’s Welcome may be able to follow-up in the Sigmar Recruitment Handicap Hurdle — and Home By The Lee Centaur and Stops A Nation appear the three to focus on in the concluding Lengthen The Odds With BetVictor (Pro/Am) Flat Race.