Heffernan at double with Medal Of Honour 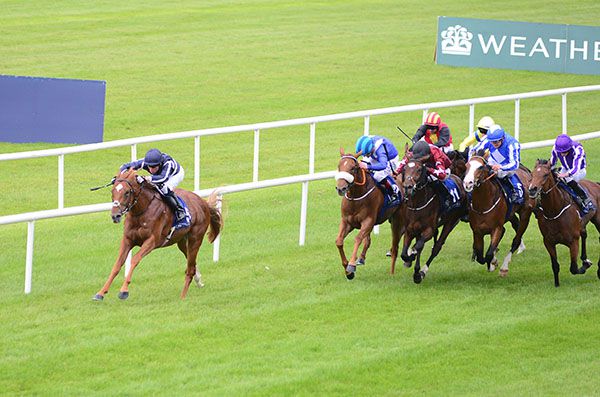 Medal Of Honour came from last to first to win the concluding mile handicap at the Curragh in the hands of Seamie Heffernan.

You certainly couldn't call him a winner at halfway in this mile contest, however, he made eye-catching headway on the outer to charge into contention at the two pole.

He soon collared Raphael and kept on strongly to win by a length and three quarters at 16/1. Bond Street the 3/1 favourite, kept on for second once in the clear. He was a head in front of Dance Emperor (10/1 from 14s).

Trainer Joseph O'Brien said: “We thought a lot of him last year and he ran very well in a few good maidens but his form kind of levelled off then. It's nice to see him come back and do that this year. Seamus was very happy with him.

“He bumped into a couple of serious horses like The Pentagon and Rostropovich.

“He likes being held up. He'll probably get four or five pounds and he might get into the Britannia or something at Ascot.”

Escaria Ten could head for next month’s Thyestes Chase after chasing home Darasso on his reappearance at Thurles last week.