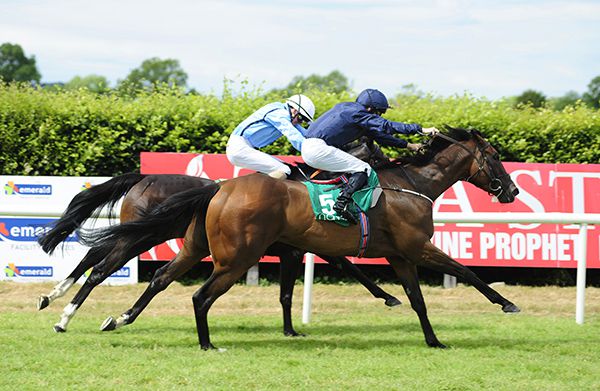 After winning the opener with Fantasy Michael Hussey and Aidan O'Brien completed a 29/1 double at Navan, as Fire Opal got the better of View The Bay in the Lynn Lodge Stud Maiden.

Twelfth and fourth on her first two starts over a mile at Naas, the daughter of War Front was sent off an easy to back 4/1 chance today, dropping back to five furlongs.

Prominent on the outer, the bay victor was pushed along to challenge the 4/7 favourite View The Bay from over a furlong out.

She gained a marginal lead inside the final furlong, and kept on well to maintain that advantage, prevailing by a neck.

The aforementioned market leader had to settle for second under Ben Coen for Andy Slattery, while Goneinsixtyseconds (12s to 10s) was another six lengths back in third.

The winning rider said afterwards: "The drop back in trip suited her and she loved the ground. She was a bit idle when she got there but she ground it out well. She has plenty of size and she'll progress after that."

Of course O'Brien was recording his third success of the day, having won the July Cup at Newmarket with US Navy Flag.