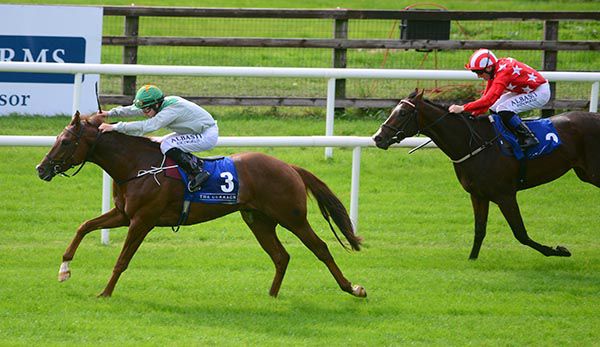 Kondratiev Wave and Gatwick Kitten split away from the rest of the field racing far side and they filled the first two positions in the Irish Stallion Farms EBF Maiden at the Curragh.

After riding his first British Group One winner yesterday on Millisle at Newmarket in the Cheveley Park, Foley guided Kondratiev Wave (20/1) to a one and three parts of a length success.

It was three and a half lengths then to third placer, and leader of the stand’s side pack, My Friend Stan

Kondratiev Wave was making his debut for Kieran Cotter, after finishing eighth on debut at Listowel for Ken Condon.

“I only have the horse a few weeks but he’d been working with some of ours and we thought he’d plenty of pace," said Cotter.

“He was in the auction maiden on Friday but got balloted out so we said we’d have a crack here at the five. We knew he’d probably prefer a bit further but with the soft ground stamina would come into play.

“Shane gave him a super ride. He bounced out and was probably on the right side. He galloped away to the line and Shane likes him.

“He had his first run over a mile at Listowel and it was probably a bit beyond him. We’ll see where he goes and I’d say he’ll be for sale.