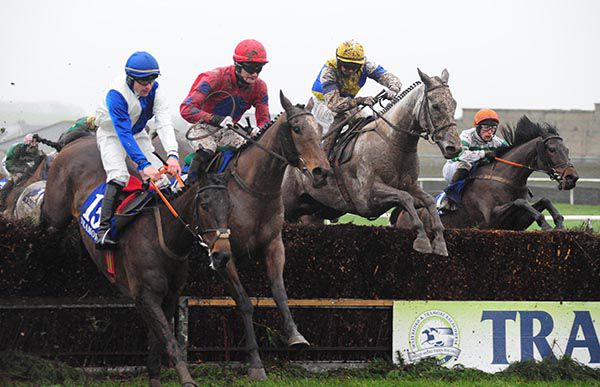 Rocky’s Silver bids to complete a hat-trick for James Dullea in the Tom Carroll Memorial Handicap Chase at Tramore today.

The grey made little impression in three beginners’ chases during the autumn before claiming a surprise victory in a Limerick maiden hurdle in late November.

He reverted to the larger obstacles for his handicap debut over this course and distance almost three weeks ago and made a mockery of his opening mark of 85 with a dominant victory.

A 16lb rise in the weights might not be enough to stop him following up.

Rocky’s Silver’s rivals include Leslie Young’s recent Thurles victor Loch Luatha and the Gavin Cromwell-trained Allduckornodinner who turns out just six days after scoring at Down Royal. Janidil is perhaps the most interesting runner in the opening David Flynn Building Contractors Maiden Hurdle.

The five-year-old was runner-up in a Listed contest at Auteuil in September and has since been snapped up by JP McManus and sent into training with Willie Mullins.

He will not have been a cheap purchase and connections will be hoping for an immediate return on their investment.

The standard is set by Henry de Bromhead’s Notebook who won a point-to-point in May and has finished second in two maiden hurdles since.

Paul Nolan’s Peculiar Genius has won at Tramore on New Year’s Day in each of the last two seasons and bids to do so again in the Introducing Racing TV Handicap Hurdle.

The son of Jeremy won this very race on the first day of 2017 and landed a novice chase 12 months ago.

He has run pretty well over fences on his last two appearances and returns to the smaller obstacles off a 17lb lower mark.

The Mullins-trained Eight And Bob has been narrowly denied at Clonmel and Cork since registering his first win since joining the Closutton yard at Wexford in October.

He must have every chance of getting back on the winning trail in the Tramore Medical Clinic Handicap Hurdle.