Insane Bolt gets his revenge on Meryems Way 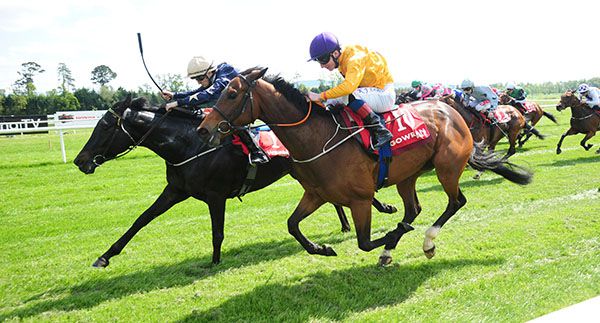 In the final furlong the race involved the horses that came widest, Insane Bolt and Meryems Way with the former prevailing.

In the closing stages today Insane Bolt reversed the form as he got the better of Meryems Way to win by a neck.

He was very easy to back drifting from 9/2 to 7/1. Meryems Way was an 8/1 chance. Gatsby Cap kept on for third at 6/1 with Ideal Pal completing the placings in fourth at 8/1.

Jockey Danny Sheehy said: “He was a bit sluggish away with me, I wanted to be a bit more prominent on him but I just nursed him in a possy and I followed Killian (Leonard, on Meryems Way).

“We swung wide turning in and in fairness to him he was very tough and gutsy for me. He kept at it very well.

“They went hard, they normally do around here and especially in an apprentice race.

"They went a good old clip and it probably suited me well as they were well strung out and even though I was slow I was able to slot in and pick my way through the field.”