Johnson delays return to the saddle until later in the week 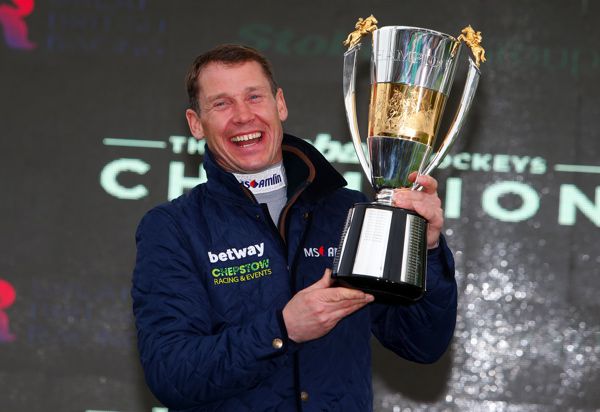 Richard Johnson will not return to action until Thursday at the earliest after hurting muscles in his back in a fall at Newbury on Saturday.

The champion jockey — who is fully confident of being back at the weekend — landed awkwardly when taking a tumble from Tapaculo at the final flight when beaten in a handicap hurdle over two and a half miles.

He said on Sunday he would take a view on Monday morning as to whether he would be back in the saddle on Tuesday, and has opted to wait a little longer.

“It was frustrating what happened at Newbury on Saturday. Tapaculo was beaten at the time when he unseated me at the last in the opening handicap hurdle and even though it didn’t look that bad I landed awkwardly,” Johnson told his Betway blog.

“It’s not always the worst fall in the world, it’s how you land. I was badly bruised at the bottom of my back and it hurt a lot. Sometimes it disappears after five minutes, but it didn’t on Saturday.

“Thankfully it’s temporary rather than anything major. I saw the physio on Monday morning and she’s happy that the bones are as they should be.

“I just need to try to rest a bit and give it some time. I’m fine sitting up or walking, it’s just the bending which I obviously have to do when I’m on a horse.”

Johnson expects to be 100 per cent by the weekend and is not concerned about his fitness ahead of Cheltenham, which starts on Tuesday week. His rides there will include defending champion Native River in the Gold Cup.

“I hope to ride later this week, probably on Thursday, but I’m not worried about next week. I know I’ll be 100 per cent by Saturday. Bruising can disappear quickly but sometimes it can linger for a couple of days,” he said.

“I’ll go swimming, it’s a good way to do some exercise without impacting my body. It’s good to get it moving and fingers crossed it gets better over the next day or two.

“Time is the best healer with things like this. I’m supposed to be doing a Cheltenham preview on Tuesday night, so I might have a closer look at the entries for the handicaps and get as organised as I can for next week.

“Pilates has been very helpful for me over the past few years, it keeps you supple and strengthens up your body. I won’t be doing any of that today, but will get back into some light exercises on Tuesday.”