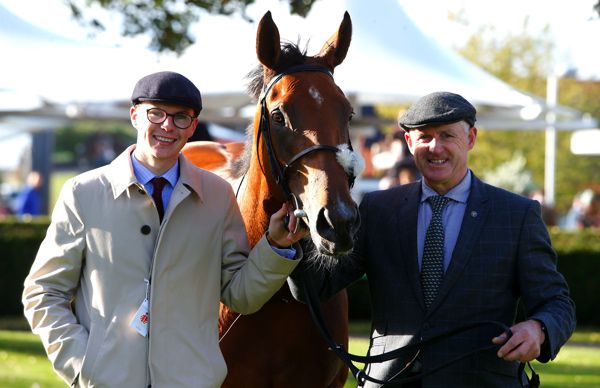 Joseph O’Brien has already achieved more than most in his fledgling training career and he is banking on Iridessa to tick off a first British Classic in Sunday’s Qipco 1000 Guineas at Newmarket.

With a Cheltenham Festival win, a Melbourne Cup and an Irish Derby already in the locker, O’Brien looks sure to break all kinds of records following his trophy-laden — albeit brief — career in the saddle.

Iridessa is already a Group One winner having won the Fillies’ Mile last season and she made a fine comeback in a trial at Leopardstown under a penalty behind Lady Kaya.

“Iridessa is in good shape and ran very well in the Leopardstown 1000 Guineas Trial,” said O’Brien.

“She was drawn out wide which did not help on that tight track, but I was happy with that run and the plan has always been to go straight on to the 1000 Guineas.

“The step back up to a mile should suit, she seemed to handle the course and distance well last year, and hopefully she will go on to be an Oaks filly.

“It would be a dream to win my first British Classic. It’s great to even be taking part in these kind of races and it is why we get up every morning.”

Iridessa forms part of a strong Irish raiding team, with Lady Kaya once again taking her on.

Her trainer Sheila Lavery is in uncharted waters with a fancied runner in a Classic, though.

“The nerves are not great! At least the filly travelled over well and settled in,” said Lavery.

“I’ll admit I was surprised how well she got seven furlongs in soft ground at Leopardstown. I was really worried going that she wouldn’t get it on that ground, but I’m more optimistic heading to Newmarket than I was before that, put it that way.

“The hope is she’s got the high cruising speed of a good sprinter and the stamina to last a mile.

“She’s drawn pretty centrally (eight) which is nice, but I’ll leave tactics to Robbie (Colgan), it will be his call.

“As for the ground, I think the only ground she wouldn’t want is when it gets loose — her only poor run last year was at the Curragh when she couldn’t get traction. I’d love just good ground, like everybody.”

Another with stamina questions to answer is Aidan O’Brien’s Fairyland, winner of the Lowther and Cheveley Park Stakes over six furlongs last season.

“She’s a big, powerful filly. To go up to a mile in the 1000 Guineas is a big stretch for her, she has a very quick mind and quick feet from the stalls,” said the Ballydoyle handler.

“We’re taking a lot on trust and will wait and see, but we’re very happy with her.”

Patrick Prendergast’s decision to hand in his licence and join forces with John Oxx sees Skitter Scatter represent the man who last tasted Classic glory at Newmarket with the legendary Sea The Stars.

“It’s always tough with three-year-old fillies in the spring, but we’re pretty happy with her work and her coat has come on well in the last month. She was a bit backward for a while, but in the last month she’s really improved,” said Oxx.

“Patrick always said she doesn’t take much work, but he had her fit early on last year. She ran at the end of March, which people would forget, and he just kept her ticking over between races then.

“It’s a little bit different this time, because she hasn’t raced since September, it’s the 1000 Guineas, it’s her first run of the season, so she has had to work a bit more than he might have worked her last year. We’ve just had to try to get that balance right.

“She’s an experienced horse though, which is a big help going into a Guineas.”

Roger Varian holds a strong hand, with stablemates Qabala and Mot Juste renewing rivalry after finishing first and second in the Nell Gwyn.

Speaking on his website www.varianstable.com, the trainer said: “Qabala lacks experience, but she’s done nothing wrong in her two starts. I think she’s come forward since the Nell Gwyn and she looks like she’ll improve for the step up to a mile. She wouldn’t want softer ground.

“Mot Juste has come on from her run in the trial and looks in great condition. I’m sure she’ll run a big race, but she also wouldn’t want any ease in the ground.”