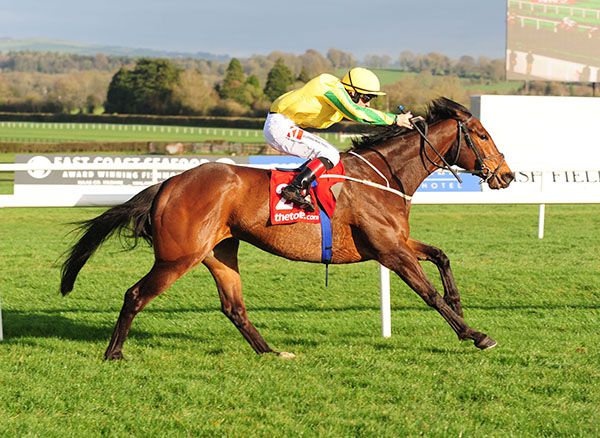 Karawaan powered clear inside the final furlong to claim the big prize on the opening day of the Flat season at Naas this afternoon, running out a convincing winner of the Tote Irish Lincolnshire for Ger Lyons and Colin Keane. Warnaq was sent off the 6/1 favourite for the €100,000 contest and bounced out to make the running in the mile event.

She gave way a furlong-and-a-half from home as both Trading Point and Karawaan moved through to dispute.

It was the later who had the edge passing the furlong pole and the Sea The Stars gelding galloped on strongly in the closing stages to post a two-and-three-quarter length win. Master Speaker stayed on to take third, a length-and-a-quarter further back with the same distance to Warnaq in fourth.

The winner was making his first start for Lyons having been purchased for £32,000 at Doncaster last August.

Shane Lyons, brother and assistant to the trainer, said afterwards:- “He hasn’t missed a day since Gaelic Bloodstock purchased him. He’s done a lot of cantering to get a good base into him.

“We weren’t sure how he’d cope with the ground but his action at home suggested he could handle it, although you’re never sure until you run them.

“Colin said he got a great feel off him going down to the start and he galloped through the ground. We always thought that he’d step up to a mile and a quarter but there is no need to be stepping him up when he wins a handicap like that.

“A lot of credit goes to David Spratt and Gaelic Bloodstock who purchased him and we’ll make a plan now. We’re only learning as much as the rest but it’s a good way to learn.

“Ger isn’t feeling too well so he decided to stay at home.”