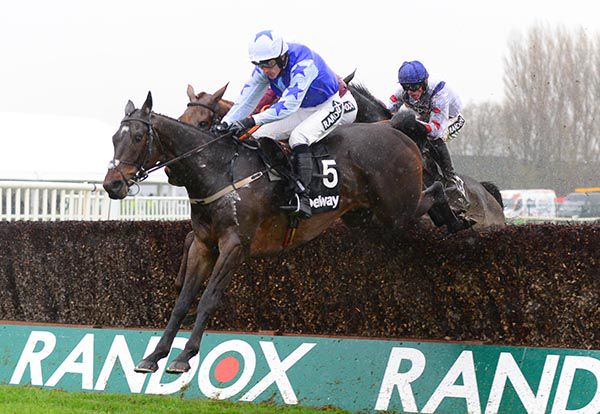 Kemboy atoned for his early mishap at Cheltenham to run out a dominant winner of the Betway Bowl Chase at Aintree.

Fancied for the Gold Cup at the Festival, he got no further than the first fence — but on this evidence he would have given his Willie Mullins-trained stablemate Al Boum Photo plenty to think about in the blue riband.

His misfortune at least meant he arrived at Aintree a fresh horse, whereas Elegant Escape, who had a hard race in the Gold Cup, was always fighting a losing battle.

Gold Cup third Bristol De Mai and Clan Des Obeaux made errors, meaning they were never really on terms, and in truth there was only one moment of doubt for the winner when outsider Balko Des Flos jumped upsides at the third-last.

Kemboy was quicker away, though, and Ruby Walsh was still sat motionless. His jumping was almost faultless throughout and he sprinted away after the last to win by nine lengths as the 9-4 favourite.

Mullins said: “He never put a foot wrong, from what I could see.

“It’s awful conditions here, and I was worried with there having been a race over fences already that the ground would have opened up and might not suit him, but he had trouble staying that trip and will get further.

“It was bad luck that day at Cheltenham. I think he’ll be fine for Punchestown. We haven’t been too hard on him this year.

“I thought the Savills Chase (at Leopardstown over Christmas) was going to be his big day. He was just unlucky at Cheltenham and has come back today.

“Maybe he’ll go to Punchestown, but I think he can go further than that.

“He might travel abroad and go to America later in the season. We’ll see.”

Walsh said: “It felt smooth. He was in a great rhythm. He was eyeing his fences up and was meeting them on a good stride.

“We weren’t going that quick. The ground was slow and he just jumped and travelled, he was always comfortable.

“Obviously he looked to have a good chance in the Gold Cup, but things didn’t go his way. That’s horse racing.

“He bounced back and was in good form at home. It was great for the syndicate (owners). Better if the sun was shining, but they’ll put up with the rain.”

“He does jump well. He was just unlucky at Cheltenham. A horse took him out there. We wouldn’t be here if he hadn’t fallen at the first.

“It was a fantastic ride by Ruby.”

Paul Nicholls said of Clan Des Obeaux: “I was very concerned with all this rain beforehand, as he does like slightly better ground. He has stayed on strongly at the end. He has had a long old season, but he has run well.

“The winner fell at the first in the Gold Cup and he was probably fresher than him. Rain on that watered ground has just gone against him again. Harry (Cobden) did say he might be slightly better going right-handed.

“We will aim for the same sort of races next year. The King George will be the number one target, as he loves it round there.

“There are no excuses today, he was beaten by a better horse on the day on that ground. He has had a great season, though, winning a King George and a Denman Chase.

“He won’t run again this season.”