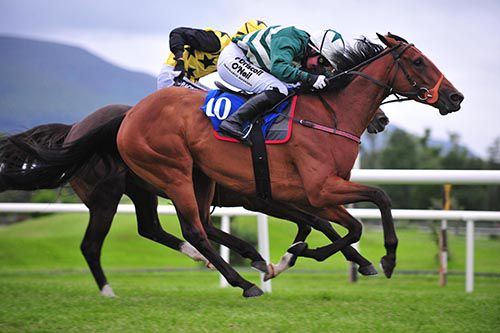 Kent, of County Cork-based Ballyhampshire Stud, bred, owned and trained the Unibet Christmas Hurdle winner and oversaw the early days of her career in Irish bumpers.

“I always knew she was a good mare — and I said as much after I won with her at Killarney,” said Kent.

“She ended up in a very good hotel, which is always a help — and any time she runs on a good level track it seems to suit her well.

“I fancied her to run a big race (in the Christmas Hurdle at Kempton) on St Stephen’s Day. With the ground being good for her, she was always going to put in a big performance.”

Verdana Blue rose to the challenge, of course, with a shock win over her stablemate and dual Champion Hurdler Buveur D’Air.

“It’s great she’s gone and won a Grade One, and the people that have her now (Crimbourne Stud) are getting a great kick out of it.

“I hadn’t bred a winner at Grade One level before, although I’d had plenty of Grade Threes and Grade Twos.

“I’ve had horses that I bred place in Group Ones on the Flat, but to see Verdana Blue beat a horse of the calibre of Buveur D’Air was fantastic.”

Reflecting on the daughter of Getaway’s time in his care, Kent said: “She was always a very easy mare to train, with a great temperament and so laid-back.”

“The Melbourne Cup is being talked about for her now.

“She’ll obviously have to go up in the ratings for that. I think the stayers’ race at Lingfield on Good Friday could be on her agenda, but I’m sure we’ll see her before then.”

Verdana Blue is one of many young horses Kent has sold to Henderson over the years.

He added: “Nicky Henderson has been buying horses off me since 1999. Most of what he’s bought have been lucky for him.

“Verdana Blue is the same age as some good Flat horses that we sold on and were born here in 2012 as well.

“I’ve noticed that in my time — in some years you can get a fabulous crop of horses. I’d suppose there’s many different reasons behind why it happens that way, including the weather and how healthy a start they get.

“The dam (Blue Gallery) got a kick from another mare and shattered her elbow — and we lost her. I’d love to get back into the family, but there aren’t too many fillies around from that line.”