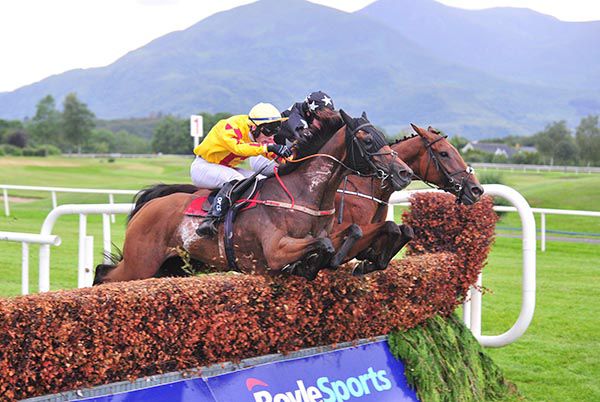 Lakemilan scooped another big prize at Killarney, as she took the feature on the opening day of the July Festival, the Grade B BoyleSports Handicap Chase.

Successful in a Grade B contest over flights here in August, the Terence O'Brien trained seven-year-old finished second on three of her seven starts since.

Available at 7/2 in early shows, the daughter of Milan came in for plenty of market support and eventually went off the clear 11/8 favourite under Kevin Brouder.

Settled behind the leaders, the bay victor came with her challenge between horses approaching the last and soon led, keeping on well on the run-in to score by two and a half lengths.

The front-running Das Mooser (20s this morning and returned 11/2) finished a gallant second under Darragh O'Keeffe for Mark Fahey, while All The Answers (4/1), who was hampered at the first, was another three and three parts of a length back in third.

O'Brien, who trains the winner for owner Denis Wilson, said: "She ran at Bellewstown in a race which was a qualifier for the Galway Hurdle but that didn't work out and we were well beaten on the day. I don't know for what reason but she didn't travel and never got into it.

"She runs well around here and she seemed fresh enough so we left her take her chance here.

"Kevin said he felt he was going to win the whole way. We messed it up a few times with her by getting caught in behind and then going out in front but this time it was a peach of a ride.