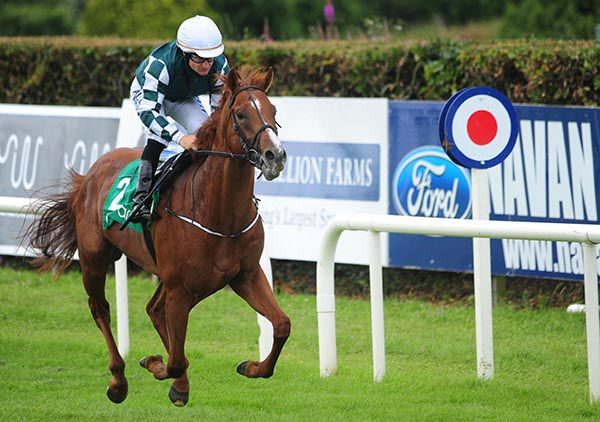 Leo De Fury made it two from two with a decisive victory in the Irish Stallion Farms EBF Race for three-year-olds at Navan.

The son of Australia won a maiden by five lengths in the Curragh towards the end of last month and repeated that winning distance today.

The 4/5 favourite tracked easy-to-back Jack Yeats with Kaftan settled in behind him in this three-runner contest over a mile and a quarter.

He moved into a narrow lead over two furlongs from home and Jack Yeats soon came under pressure.

Meanwhile, Kaftan had closed on the outer and looked the danger in second at the furlong pole.

Leo De Fury stretched right away, though, in the final furlong to win well under Shane Foley as Kaftan (9/4) had to settle for minor honours.

In-form Jessica Harrington said: “That was great. You are always a bit frightened when they win a maiden easily, you are never quite sure what they've beaten.

"It's great to get that out of the way. We'll make a plan now. Shane said he'll stay a mile-and-a-half.

“I'd say he'll head up to stakes company now and we'll see where we go after that.

“He was impressive. He looks like a stakes horse and I hope he is.

"He's only had the two runs and he'll only improve. Shane said he was a bit green still.”