Lil Grey too good for the boys in Curragh opener 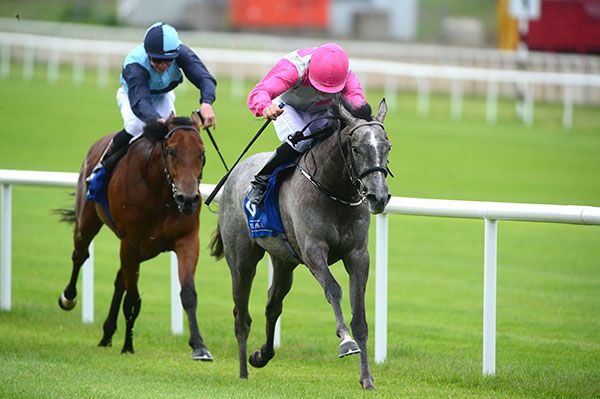 Lil Grey beat the boys in the opener at the Curragh, the Irish Stallion Farms EBF Race.

The only filly in the eight strong-field, the Sheila Lavery trained grey was sent off a 9/2 chance (from 6s on-course) after finishing a highly-encouraging second on her racecourse debut at Leopardstown last month.

That Foxrock effort came over seven furlongs, and back in trip to six this evening, she raced mainly in second under Robbie Colgan.

The daughter of Starspangledbanner got to the front a furlong and a half from home, and kept on well when ridden in the closing stages, going on to score comfortably by two and three parts of a length.

Newcomer Year Of The Tiger (7/1) kept on to take second under Wayne Lordan for Aidan O'Brien, while Alligator Alley (4s in early shows and returned the 13/8f) was another half a length back in third.

"I thought when I put her in this race 'Sheila you're not making life easy on her putting her in against all these colts'," said Lavery.

"She's only worked once, she hadn't worked before she ran the last time in Leopardstown and then I brought her to the Curragh.

"Robbie was riding Lady Kaya, not that she worked with her, but she worked in a group behind her.

"She was still green when she picked up and went past the horses. I thought I'd put her in and see because I love running horses at the Curragh.

"She's been away and done swingers and had a racecourse gallop but she's only been asked to pick up and go past a horse once.

"I know she comes in and jog-jogs around but that's just her. She's not jig-jogging because she's gone in her brain. She jig-jogs in from the gallop.

"The Grassicks bred her in Newtown Stud and Cathy Grassick said the mother was like that too.

"She's just taken everything so well."

The winner is owned by Spyglass Syndicate and was bought for E12,000 at the Goffs Sportsmans Yearling Sale last October.