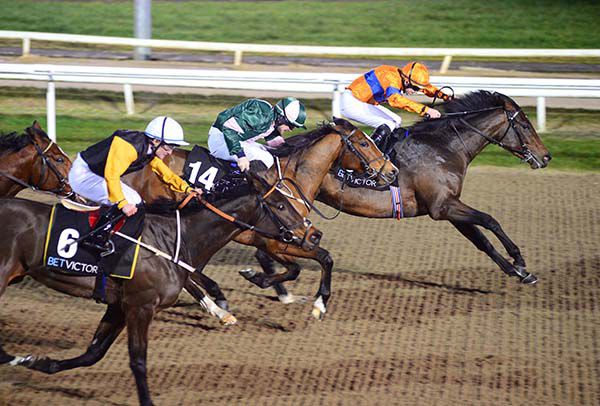 The subject of support earlier in the day, Numerian (5s out to 8s) was easier to back on track but he still delivered in the Lengthen The Odds With BetVictor Maiden (Plus 10 Race) at Dundalk.

Wayne Lordan rode the son of Holy Roman Emperor for Ann Marie O'Brien and her son Joseph, and on his first outing for six weeks the three-year-old made it third time lucky.

Numerian has progressed from run to run and the home bred came through from mid-division to get on top inside the last for a half length and neck verdict over Unabridged and Lord Wimbourne.

“He’s a lovely big horse, and is still a bit raw. He went through the race on and off the bridle, and even when he got there he had a good look around. He’s a horse that is going to improve plenty," said Lordan.

“I’d never sat on him before but Joseph said he was a fine horse and can race a bit backward. He finished out the race well.”

R. Coakley, rider of Beethoven's Gal (GB) trained by M.Halford, reported to the Clerk of Scales that his mount did not let herself down when she came off the bridle.