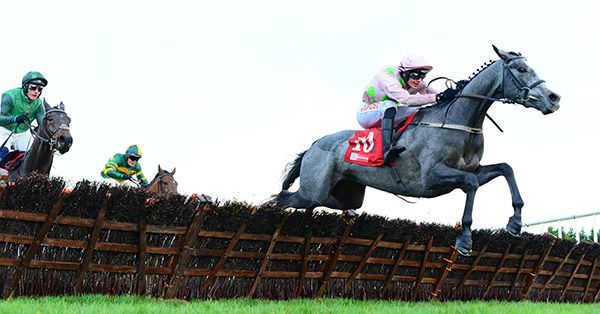 The Willie Mullins-trained Lossiemouth created a big impression on her Irish debut, as she ran out a comfortable winner of the Bar One Racing Price Boost Juvenile Hurdle.

Having already impressed on her only previous outing at Auteuil in April, the Great Pretender grey was sent off at just 3/1 for this Grade 3 contest.

Settled in mid-division on the outer by Danny Mullins, she took closer order from the third last and was pushed along to lead after the next.

A swift jump at the final flight sealed the deal for the Rich and Susanna Ricci owned victor, as she stretched clear on the run-in to score by four lengths.

Returned the 5/4 favourite, Zarak The Brave completed a 1, 2 for Mullins. The choice of Paul Townend, he got a lovely run through on the inner approaching the second last, but was far from fluent at the final two obstacles.

There was another two-and-a-quarter lengths back to Comfort Zone (10/3) in third, with this one keeping on nicely in the closing stages under JJ Slevin.

"That looked very good. She came with a nice reputation from France and has been working nicely at home but that's certainly way better than anything she has shown us before," Mullins revealed.

"Today was just a finding out mission to see what we had and it looks like we have found a good one.

"Danny said he could have gone at any stage. He said her jumping was very good and she has so much scope. She was very good.

"We've found out a lot today and we will look forward to the future with her. We'll have a look at Leopardstown at Christmas and see what the penalty structure is and there is also the Grade 1 at the Dublin Racing Festival."

Lossiemouth is now just 4/1 (from 12s) with Paddy Power for the Triumph Hurdle at Cheltenham in March.