Lostintranslation impresses in the Mildmay 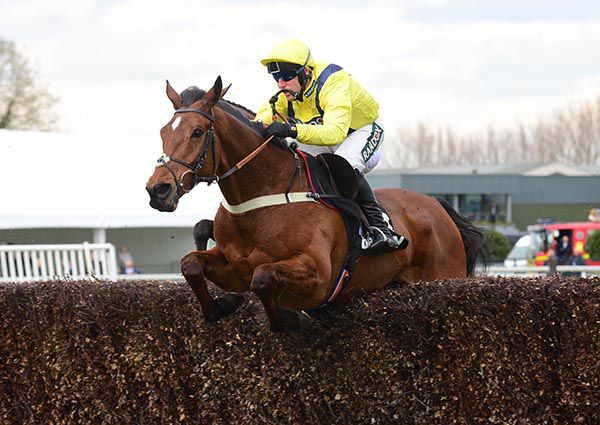 Lostintranslation ran out a very easy winner of the Betway Mildmay Novices’ Chase at Aintree.

Having been campaigned at two and a half miles this season and taking part in a thrilling trilogy with Defi Du Seuil, he just looked short of speed against that rival and was trying three miles on this occasion.

Adapting waiting tactics, Robbie Power was happy to let Top Ville Ben make the running and with RSA winner Topofthegame one of the first under pressure, it soon became clear Lostintranslation just had the leader to beat.

When he got in tight to the second-last, Top Ville Ben went a couple of lengths clear again, but Lostintraslation (3-1) quickened impressively and after jumping the last well he sauntered to victory.

It was to Topofthegame’s credit that he stayed on for second, albeit beaten six lengths.

The Colin Tizzard-trained winner was given a 10-1 quote for next season’s King George VI Chase by Betfair.

The Dorset handler said: “We wanted to save him until the end to beat Topofthegame for pace, that was our thinking.

“I don’t normally get involved in any of the tactics. I really wanted to talk to Robbie about what he was going to do and he sort of confirmed what I was thinking, which was absolutely lovely.

“Obviously we will be going down that route (Gold Cup). He is a staying chaser. We won’t run him again this year, as we have done plenty with him. He is just a dream horse.

“I’ve always felt the Cue Cards the Native Rivers and the Thistlecracks — where am I ever going to find another one. I think we have seen one today.

“I thought this was his trip, but the owners and Robbie wanted to leave him at two and a half a bit longer, as he is a baby. I don’t mind listening at all. I had my way today. Look at him now, he is hardly blowing. He jumped like poetry.

“He just crept round and made it look so easy.”

He added: “The last month has not been great, but we have won £1.7 million had 72 winners and I keep telling myself that.

“Don’t think we are not driven, as we have hurt as much as anything the last month and we’ve just tried to work out what it is. I’ve held my breath and carried on doing what I’m doing.”

Paul Nicholls said of Topofthegame: Nicholls “Nothing went to plan today. He was in a bit of a pocket and was too far behind turning in. It just didn’t happen for him.

“It won’t make any difference to next season. You’ve got to go and give it a go and sometimes it doesn’t work out.

“I am disappointed as I think we could have done things a bit differently today. One got a soft lead in front and I wouldn’t have minded following him, but we got a bit behind and it didn’t suit him.

“He’ll be trained for the Gold Cup and today had no bearing on what will happen in the future.”

North Yorkshire trainer Phil Kirby was thrilled with the effort of the gallant Top Ville Ben, who was just denied the runner-up spot.

He said: “I’m absolutely delighted with him. He’s run great, but we all want to win.

“He used to be a mad runaway, but he’s going the right way now.

“He’s jumped very well and not let anyone down. He’s a very nice horse for next year.

“I’d say that’s probably it for this season and we’ll aim for the National next year."