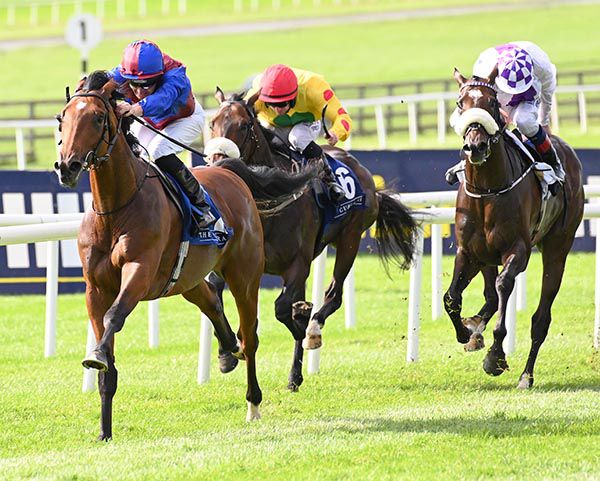 There was plenty of the ‘wow factor’ about the victory of Luxembourg who cast aside his four rivals with a powerful turn of foot to provide Aidan O’Brien with an eleventh successive win in the Alan Smurfit Memorial Beresford Stakes.

The son of Camelot was sent off the 8/13 favourite on the back of a Killarney maiden win on debut in July and landed the odds under a confident hold-up ride from Seamie Heffernan.

The half-brother to Group 2 winner Leo De Fury quickened up impressively on the outer inside the final furlong and soon put daylight between his rivals.

There was a gap of four and three quarter lengths at the line back to Manu Et Corde who just denied the front-running Tuwaiq the runner-up spot.

“The most impressive thing about him is he knows he’s good and he doesn’t show it off. He doesn’t show you until you press the button and say give us a look.

“When you have that turn of foot a mile is well within his comfort zone.

“His dad was a good staying horse that had the pace and class to win a Guineas. If Aidan wants to run him in the Guineas he’ll change his galloping procedures and if he’s targeting the Derby he’ll go a different route.

“The turn of foot he showed me today was pretty exciting. I’m not sure what he’s going to be targeted at but he couldn’t have done that any easier.”

Paddy Power and Betfair both cut Luxembourg into 10/1 (from 20/1) for next year's Derby.

The Model Kingdom cruises home on first crack at hurdling

The Model Kingdom made a winning transition to flights in the opening mares' maiden hurdle at Tipperary at long odds-on.