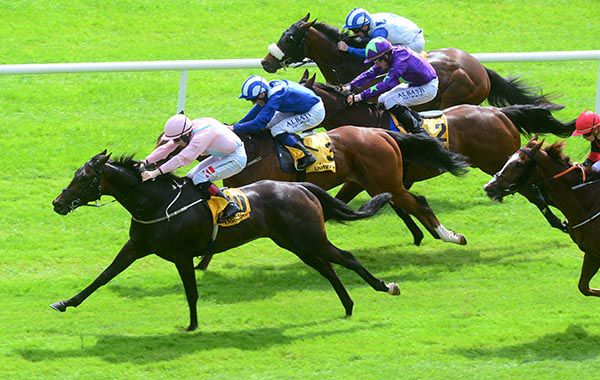 Basic Law bounced back to winning ways when claiming the Dubai Duty Free The Irish Village Handicap at the Curragh, giving Ger Lyons and Colin Keane a double on the card.

The Lawman gelding could only finish fourth when bidding for a four-timer at Tipperary last Sunday but was back in the winner's enclosure this afternoon.

Keane produced the 6/1 shot to challenge at the furlong pole and he got on top in the closing stages to beat Jassaar by three-parts-of-a-length.

“It was complete and utter trainer error running him on Sunday. We knew going down the ground wasn't right for him,” said Lyons.

“I shouldn't have run him but the beautiful thing about having Colin is that he excepted it very early and he basically had a racecourse gallop.

“He came home and licked the pot. He's a very straight-forward horse and this was too good of a pot not to have a go at. It would have been a gutless move not to have a look at it, if we got beat we got beat.

“He's a nice horse and he's on the improve.

“With these Hong Kong horses I could get up in the morning and they could tell me their permit is due and he's gone.

“I just hope they leave them with me for another year. I lost Mackqeez the other day and California Daddy. It's a high-class problem though and you have to take the good with the bad.”

Keane added:- “He’s a handicapper’s nightmare as he only seems to do enough. It takes a fair horse to win four in a season and he’s a lovely horse to have.”