Lyons trains winner for Magnier as Even impresses 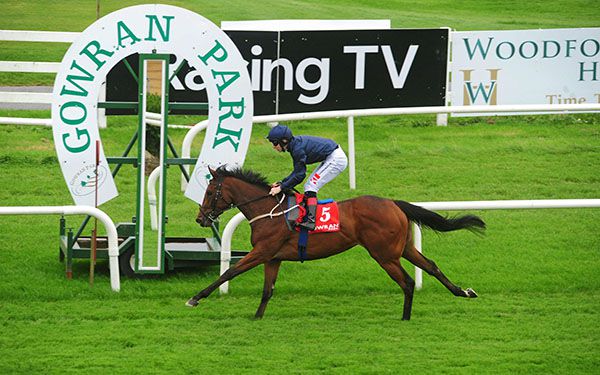 Even So and Colin Keane
© Photo Healy Racing

Ger Lyons trained his first winner in the colours of Coolmore supremo John Magnier when Even So ran out a cosy winner of the Irish Stallion Farms EBF (Fillies) Maiden at Gowran this afternoon.

The Camelot filly had been a big eye-catcher when running on into third behind subsequent Listed winner Blissful at Tipperary last month.

She was sent to post a solid 5/4 shot today and Colin Keane sent his mount to the front after a couple of furlongs.

Her rivals were at work going to the two pole and Even So picked up well when asked for an effort a furlong-and-a-half from home, going on to record a convincing three-and-three-quarter length win over Azila

The winner is in the ownership of Mrs John Magnier and Paul Shanahan and Lyons said afterwards:-

"Colin doesn't ever let the race get complicated and as I said to him don't ever come in and tell me they didn't go quick enough.

"She learned plenty from Tipperary which we expected her to do and I didn't want to run her here on Saturday because it was good to firm and to be honest the first winner I had in these colours I wanted it to be with Colin.

"My gut impression right now is we'll put her away and see her next year. There is no need to rush anything, she is a work in progress and she'll only improve for a winter and 10 furlongs at the minimum.

“Anything from these guys (Magnier/Shanahan) could be high class and you've more potential with her than the ones I buy for nothing at the sales."

Regarding his link with John Magnier he added "I didn't think it was for him as I was asked, for the last couple of years, to take a horse for Paul Shanahan.

“I kept putting it off and off but last summer he asked me to come down and look at a few fillies and I said 'Paul if you want to send me a horse, send me a horse'. Then this filly arrived.

"I thought it was for Paul Shanahan but one day the blue and pink colours (of owner Magnier) arrived and I thought 'oh Jesus here we go'!