Magic wins at Ascot for Mrs Harrington and Power 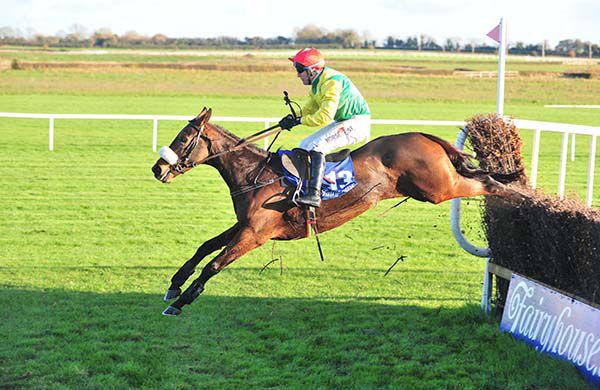 Magic Of Light followed up her Newbury win over fences with a valuable success over timber at Ascot in the OLBG.com Mares’ Hurdle.

Having her first run over the smaller obstacles since September 2017, she was keen throughout in the hands of Robbie Power.

Petticoat Tails was allowed her own way out in front, with the others content to ease their way into the race.

The dash for home began just before the home bend, but Power was in the box seat in second and poached an advantage he was not to relinquish.

Jester Jet came home in her usual position of second, three and a quarter lengths behind the 15-8 favourite.

Kate Harrington, assistant trainer to her mother, said: “Fair play to Robbie, who spotted this race when it re-opened on Monday and he said ‘put her in’. She is entered at Huntingdon on Friday, and she will go there if the ground is soft enough — but that is as quick as she wants it, because she wants soft ground.

“She will stay over and is going to Paul Webber’s for a few days. She absolutely loves it over here.

“She has got a lovely page. She seems to have improved a serious amount this year. I don’t know what it is — maybe she has just grown and strengthened up.

“We will possibly look at one of the handicaps at Cheltenham. She will get an entry in the Irish National. She is a mare that stays all day, and never knows when to give up.”

Power said: “She did it well back over hurdles. She has been chasing for a long time — and to be fair, she didn’t take that long to come down. She was flicking them very quick and hurdling very well.

“We are delighted with it. I was always comfortable enough, and she was having an idle in front — because there is plenty to look at here.

“She is in at Huntingdon on Friday in the mares’ Listed chase, so we will have a look at that and see how she comes out of it.”