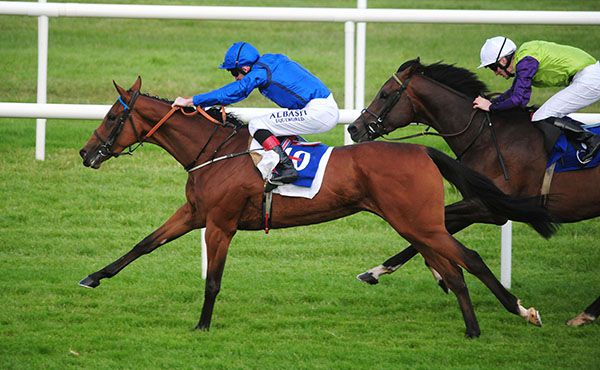 The Jim Bolger trained Cerro Bayo claimed the Londis Roscommon Maiden on debut, but gave her connections a scare in the closing stages.

The well-bred daughter Dansili appeared to have matters under control when she hit the front and went a few lengths clear from the two furlong pole.

However she jinked left inside the final furlong, with her rider Kevin Manning doing very well to keep the partnership intact.

This incident gave the front-running Yenillik another chance up the rail, but the Godolphin owned victor kept on again in the closing stages to see off that rival by half a length.

The runner-up was returned the 2/1 favourite under Billy Lee for Willie McCreery, while X's Girl (15/2) was another four and a quarter lengths back in third, with Ross Coakley aboard this one for John Oxx.

Manning, who lost his whip just inside the two furlong pole, said afterwards: "I actually thought for a stride that I was gone but she just arrived back underneath me again.

"She had been working very well at home but was green and raw around there. When she picked up she was going to put it to bed pretty well until she just had that jink.

"It's very hard to tell (why she jinked). I don't know whether she caught the big screen, the picture can often just flick, but she spotted something as her two ears went forward and she just jinked very, very quickly.

"She is going to improve bundles on that. She was on and off it throughout the race but I'd say there is plenty of improvement in her."

Travelling head man Ger Flynn added: "We should probably get Kevin on the gymnastics team after staying on up the straight there!

"He said she was very green and very raw throughout the race. She'll come on a lot from the run and hopefully she's a nice filly going forward.

"She's our first Dansili winner and she has a nice page."

R. Coakley, rider of X' Girl trained by John M. Oxx, reported to the Clerk of Scales that he had to check his mount on the first bend.