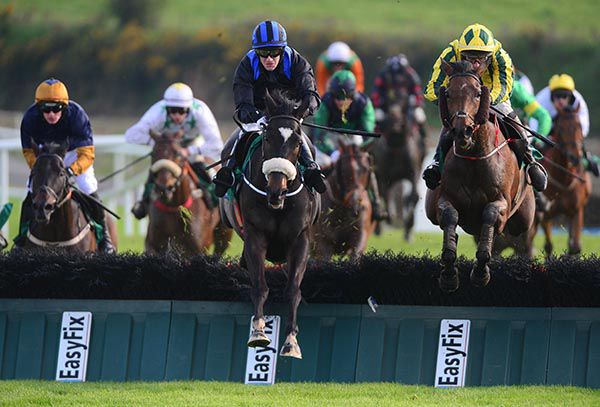 Manomine made every post a winning one to run out a game winner of the Portman Dental Care Handicap Hurdle at Downpatrick.

The Keith Watson-trained gelding returned to hurdling having won the charity race at the Punchestown festival last week.

The ten-year-old kept on, and despite drifting left in the closing stages, was always holding his rival to secure a length success.

Trainer's son Marshall Watson said: "We were actually about to give up on this horse four or five months ago. He just lost his way and he was getting 10 years of age.

"Kate Kelly rang me and said 'could I get a ride in the (charity) race?' and I said 'yeah no problem'. We basically pulled him out of a field four weeks ago.

"He bolted up in the charity race and I turned round to the owner Jimmy (Matthews) and said we should enter him up just in case over hurdles.

"He worked really well on Wednesday and has sparkled into some sort of life. He has plenty of back class. As they always say form is temporary and class is permanent.

"He's in on Tramore on Tuesday and Clonmel next Thursday so I say he will turn up for either one.

"Last season was ouR best season by far. Not a bad start to this season, it's only our second runner.

"We have an open day next Saturday. It is more to do with trying to introduce people into racing. We are about to launch a racing club and we are moving forward.

"Those are the same colours that won the Ulster National.

"The syndicate is Jimmy Matthews and his family."