Matterhorn so good in the Easter Classic at Lingfield 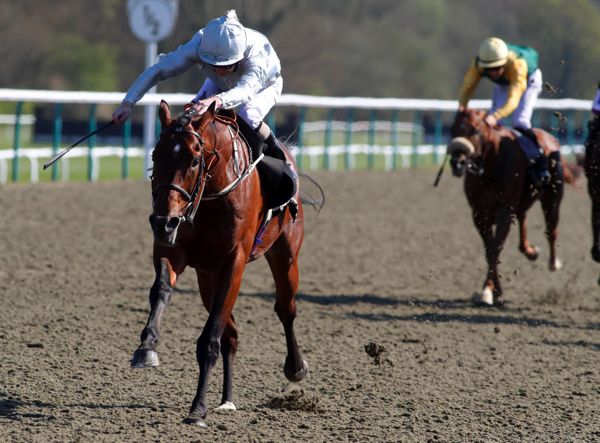 Matterhorn inflicted a shock defeat on hot favourite Wissahickon with a dominant display in the Betway Easter Classic at Lingfield.

Having spreadeagled the field in the Cambridgeshire at Newmarket last September, Wissahickon established himself as one of the stars of this season’s All-Weather Championships with a hat-trick of Lingfield wins in the Quebec Stakes, the Winter Derby Trial and the Winter Derby itself.

John Gosden’s charge was unsurprisingly all the rage to complete a course and distance hat-trick on Good Friday under Frankie Dettori — but the Mark Johnston-trained Matterhorn had not read the script.

Drawn in stall eight of the eight runners, Wissahickon was forced to race wide for much of the 10-furlong journey, but made his move before leaving the back straight.

And while Dettori was soon hard at work, 9-2 chance Matterhorn was still full of running under a confident Joe Fanning, shooting clear after the home turn to seal a most impressive seven-length success.

Wissahickon just held on for second from 40-1 shot Pactolus.

Matterhorn had won six of his eight previous starts on the all-weather, but had disappointed on his latest outing when the odds-on favourite for the Magnolia Stakes at Kempton three weeks ago.

Johnston said: “It was a step up in class last time out. It was a diversion from the plan as we thought we could take in a Listed race along the way. I think this is clearly a better performance.

“We thought long and hard if he was going to run over a mile or a mile and a quarter, but we had Cardsharp for the mile race and we decided we shouldn’t run away from one horse (Wissahickon).

“The stable companion of the favourite (Court House) was taking him along all the way and I was hoping it wasn’t going to be a repeat of Kempton. He was fantastic when he hit the front as he was still full of running.

“We thought he was a very good horse, but he had problems and he was going to go to the sales last October. We ran him just once before it to see if he was worth keeping and once he started running on the all-weather and winning we had this in mind.

“We’ll go into Pattern company now and it may be a different story, but we have got to find out.”

Gosden said of the vanquished Wissahickon: “He was racing three wide from that draw and it is tough round here when you hit the bend quick.

“He spent the whole time out in the middle of the track and is a cover up, turn-of-foot horse.

“The draw slightly did it for him, but that is life and that is racing and the winner has won very well.”