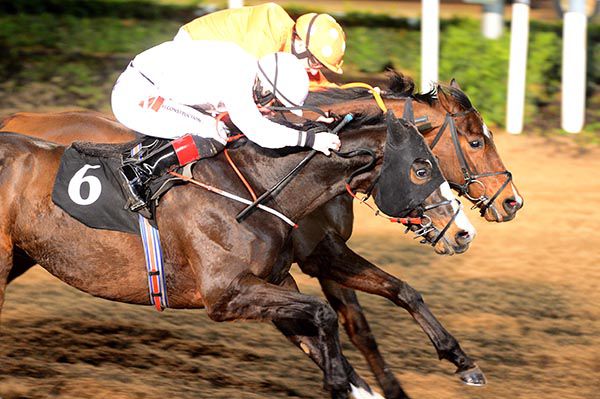 McDonogh earlier steered well-bred Hasimiyya to an important first win in the www.dundalkstadium.com Handicap (div 2) and doubled his tally on five year old Markhan who just about held off the late challenge of Itsalonglongroad to win by the smallest of noses.

Markhan was notching his fourth career success and following the race McDonogh reported “it was a messy race and we were walking. He didn't travel down the straight the first time and I left him alone as Mouse (O'Ryan) and Gordon said not to bully him.

“Then they put on the brakes all the way down the back so it was a bit of a farce of a race. I needed to get a bit closer sooner and he got me there a shade earlier than I thought.

“I suppose he was idling a little bit but he did find a bit when the other horse came and he stuck his head out. I'd say he's sweetened up a lot since going jumping.

“Hopefully he'll win another one of those if the handicapper isn't too hard on him, and he shouldn't be as he only won a nose.

“He showed a good attitude and stuck at it well. It's been a great night.”