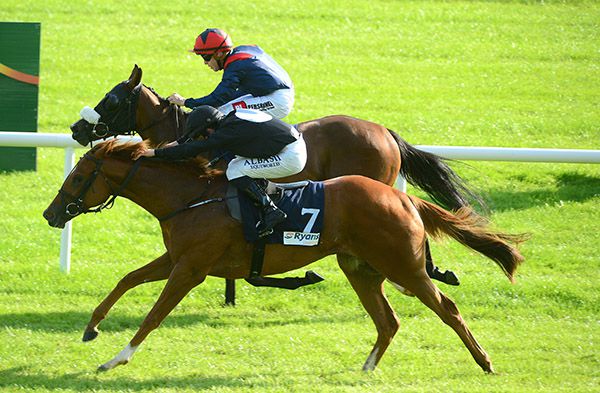 Millisle, near side, gets up to beat Isabeau
© Photo Healy Racing

The 11/2 shot (from 8/1) really found her stride in the final furlong as Isabeau's shortened in the closing stages.

Foley swooped close home to get up by half a length from the 13/2 runner-up. Lil Grey who was heavily punted down to 11/8 favourite, kept on for third in this six-runner event without ever getting involved at the business end. She was beaten three lengths by the winner.

Millisle had been beaten into second at odds on when last seen in Down Royal last month.

Jessica Harrington said: “That's great. She did everything so easy in Bellewstown and, in Down Royal, when she got into a bit of a battle she'd never done it before. The horse leaning up against her, and everything, stood to her today.

“I didn't like the draw we had (in seven) but she coped with it. They all jumped well in front of her and they all went so he had to sit and wait.

“I thought she was never going to get there and then she won half a length.

“It's lovely to get it for Francis Jennings. She's from an old family of his and is the last filly out of that mare (Green Castle). It's very important for them and she's worth keeping now for breeding.”