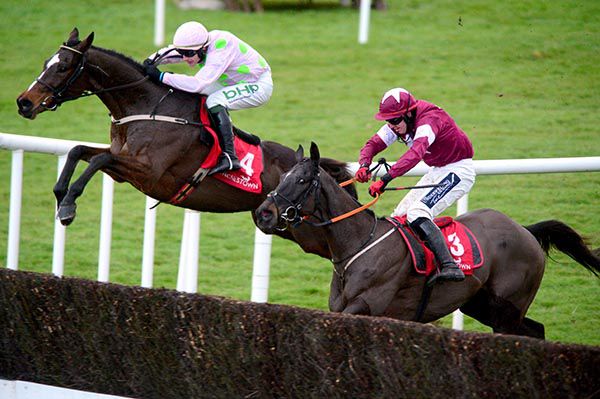 The eight-year-old is the eighth horse to win the Grade One over two and a half miles for a second time after a gritty performance.

Paul Townend set out to make all the running on the Willie Mullins-trained eight-year-old who was far from foot perfect at a number of fences, with Shattered Love and Real Steel close up. Hardline briefly hit the front between the last two fences, but Min (8/11 favourite) rallied and jumped the last by far the better of the pair to regain the lead before going on to score by two and a quarter lengths. Presenting Percy put in good late work for third place, just another length away. The latter was ridden by JJ Slevin, after his regular partner Davy Russell was taken ill before the previous race.

Mullins said: “I thought it was an unbelievable performance coming after three mistakes. I think he wanted to go faster, but it’s hard to judge what is happening in that wind.

“To come back from what I thought was certain defeat after the second-last was very good. He picked up and threw a huge leap at the last and was going away after the last.

“I hadn’t thought beyond today and don’t have any plan for him. The jump at the last just shows what he had in the tank and that sealed it for him.

“I think he can jump way better than that and can improve from that run. He can go over two miles or two and a half.”

Min remains unchanged at 8/1 with BoyleSports for the Ryanair Chase but was trimmed into 6/1 (from 8/1) with Betfair and Paddy Power. BoyleSports also leave him at 12/1 for the Champion Chase.