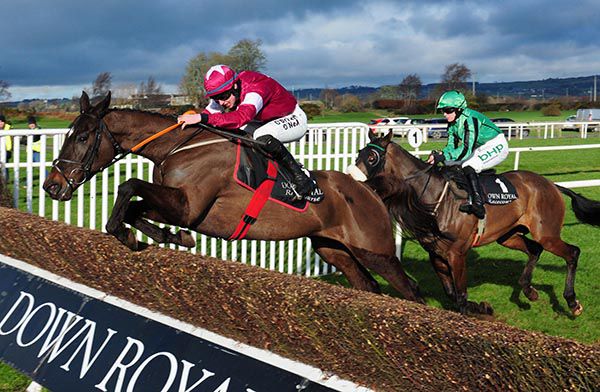 Favourite backers got it right in the opening Irish Stallion Farms EBF Rated Novice Chase at Down Royal courtesy of the Gordon Elliott-trained and Jack Kennedy-ridden Monatomic (5/2).

They came for D'Bru Na Boinne (11/2 into 7/2, finished 3rd) and Frankly All Talk (7s into 5s, finished 5th) here but it was second market choice Peacocks Secret that gave Monatomic most to do.

The sweet-travelling Gigginstown House Stud-owned victor had to battle to eventually defeat gritty front-runner Peacocks Secret by a length and a half.

"He has been threatening to win one of them for a while, he has been running well in them all. The conditions race suited him and the jockey (Jack Kennedy) gave him a great ride," said Elliott.

"He did (jump well), they are big fences around here. He (Kennedy) said if he was to ride him again he would probably hold onto him even a bit longer. He doesn't do a whole lot when you let go of his head.

"He had to pick back up so it's grand. He's got loads of experience so he might be okay."