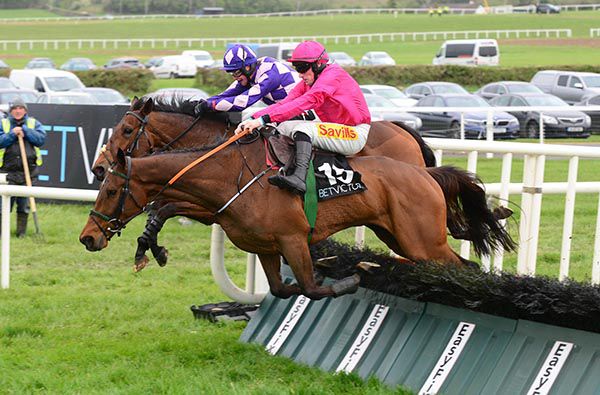 Monksland’s brother Trappist Monk showed a good attitude to win his first race at the sixth time of asking in the BetVictor Bet #5 Get #30 Offer Maiden Hurdle at Kilbeggan.

Sean Flanagan won three on Monksland and the Wexford man was aboard Trappist Monk (8/1) too, but he must have doubted that a win was possible after a final flight mistake.

That appeared to hand the initiative to Touch Of Oscar (3/1 second favourite). Trappist Monk got there near the line though, to score by half a length.

Pre-race this near two and a half miler was all about Batcio Backed from into 13/8 from 11/4 on track, and from bigger earlier, the grey could manage no better than 12th.

“I thought after the second last I was going to pick him up easily enough, and if I got a good jump at the last that I’d win easy but far from it. I was very impressed with the way he stuck his head down from the back of the last," reported Flanagan.

“He’s a big old chasing type, and a brother to Monksland. You wouldn’t think that he would go around here, and when he gets jumping a fence you’d expect to see a lot more from him.”

At the request of the Stewards, Mr A. McMahon, rider of Batcio (FR), trained by T.M. Walsh, reported to the Stewards' Secretaries that his mount stopped quickly.

D.G. Hogan, rider of Licklighter trained by Denis Gerard Hogan, reported to the Clerk of Scales that his mount stopped quickly.

The Irish Horseracing Regulatory Board Veterinary Officer examined Batcio (FR), trained by T.M. Walsh, at the request of the Stewards and reported the animal to be post race normal. Samples were taken for analysis.

The Irish Horseracing Regulatory Board Veterinary Officer examined Licklighter, trained by Denis Gerard Hogan, at the request of the Stewards and reported the animal to be post race normal.