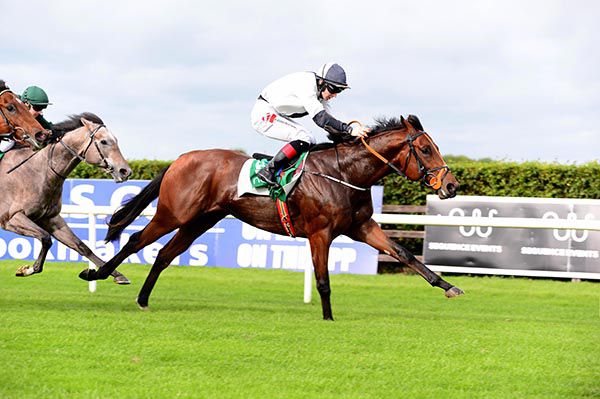 Flaming Moon provided Matthew Smith with his first juvenile success, as he took the opener at Navan this afternoon, the Arkle Bar Median Auction Maiden.

A good second on debut at Fairyhouse last month, the cheaply bought Born To Sea colt was expected to go one place better today and was sent off the 11/10 favourite.

Settled behind the leaders by Colin Keane, the bay victor was ridden to lead inside the final furlong, keeping on well in the closing stages to hold off the fast-finishing So Suave (20/1) by a diminishing neck.

The Johnny Murtagh trained runner-up really powered home from over a furlong out, but ultimately had to settle for the runner-up berth under Shane Kelly.

The front-running King Of Stars (4/1) was another length and a half back in third, with Donnacha O'Brien aboard this one for his brother Joseph.

"It was nice that he stepped up on his first run," said Smith.

"Colin said that just in the last half furlong he was tiring, it was very testing.

"He's a really nice horse and was showing plenty at home. He's been working well with the likes of Warnaq and One Cool Poet.

"He did what we expected the first day, the draw was the only doubt then, and we were delighted with him.

"He has plenty of potential. Colin mentioned the Birdcatcher but it might be a bit soon. We'll see how he is but if we don't get another run into him this season it's not the end of the world.

"Who knows I mightn't have him still if I get him sold with a bit of luck.

"That's my first two-year-old winner and it's great to get it."