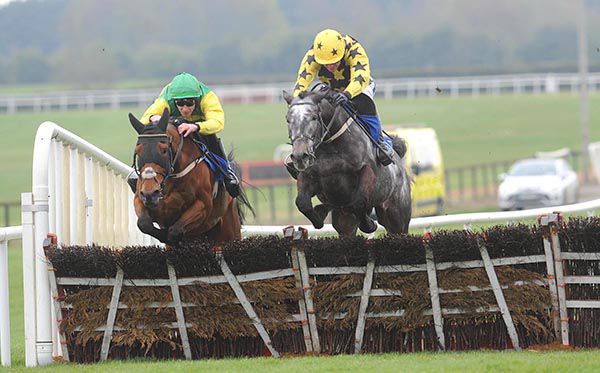 A four time winner on the level for Sylvester Kirk, the son of Royal Applause impressed on his Irish debut at Wexford in October.

He since finished second in a Listed contest at Naas, and was sent off the 15/8 favourite this afternoon in the colours of the Shanakiel Racing Syndicate.

Settled off the pace in mid-division, the grey victor improved into third before the straight, and came with his challenge between horses after two out.

He jumped the last in a share of the lead with stable mate Cash Back and a good battle ensued from there, with three parts of a length separating them at the line.

The runner-up, with David Mullins aboard, was backed from 6s to 7/2 on-course, while Valdieu was eighteen lengths away in third.

Eclair Du Beaufeu proved very easy to back, and he finished a disappointing last.

Walsh, who took the opener on Great White Shark said afterwards: "It rode a good race. I thought he'd progressed a bit since Naas, and the runner-up has run a blinder as well.

"This fella missed most of the winter as he got a setback after Wexford, and Cash Back was a bit slow to come to hand. I'd imagine they will both go to Punchestown.

"David was better at the last than I was but I was confident I had the measure of him."